Libertyville police and firefighter/paramedics responded about 5:30 p.m. Sunday August 4, 2019 to their own emergency at the police station at 200 East Cook Avenue when a marked police SUV caught fire in the parking lot. The fire began minutes after the vehicle was occupied.

Libertyville firefighters extinguished the fire with extra caution because of the possibility of live ammunition igniting and firing randomly.

Willie Gillespie, who manages a weather and news Twitter account for Lake County (@wgweather) posted a 9-second video of the fire and notified local media. While capturing the video before Libertyville firefighters arrived, he maintained a relatively safe distance at the location where there was a risk of detonation of ammunition.

According to Liberty Safe and Security Products, a manufacturer of guns safes in Payson, Utah; chambered ammunition in a fire is just as dangerous as a cartridge that is fired under normal circumstances in a firearm. With structure fires in mind, the company recommends storing ammunition separately from firearms with a specialized AMMO CAN ammunition storage cabinet. Ammunition stored outside a weapon is likely to produce a more local explosive effect. Liberty Safe published that the most dangerous component of a cartridge is the brass, or fragments that in an explosion may cause eye injury or penetrate skin. On their official website, Liberty Safe published that “there is no evidence that a cartridge that is not in a firearm can cause a mortal wound, either by action of the bullet or the brass/primer fragments.”

Regardless and depending on how police departments store ammunition and weapons in vehicles, it would always be good advice to stay away and/or take good cover in the event of a police vehicle fire. In ANY vehicle fire it is usually safest to be a good distance in front of the vehicle rather than at the side or at the rear of the vehicle, in case a personal vehicle has a weapon and/or ammunition stored in the vehicle, such as glove compartment, under a seat, or in the trunk. Additionally, air bag canisters have been known to detonate and become a projectile out the back area of vehicles during vehicle fires. 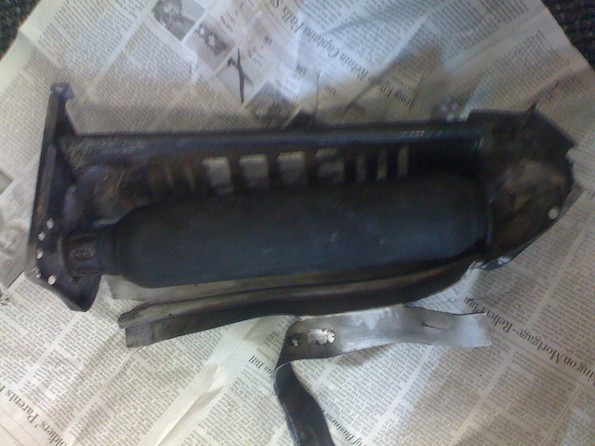 Air bag canister that flew out of the back window of a vehicle during a car fire in Arlington Heights in February 2008, and landed about 50 feet behind the vehicle.

See also …
LIBERTY SAFE | What happens to AMMUNITION in a fire?

THANKS FOR READING CARDINAL NEWS …