Facebook was down about 11:20 a.m. CDT for about 5 minutes in Arlington Heights, Illinois. Outage tracker Down Detector (downdetector.com/status/facebook) reported a spike in reports from Facebook users from countries around the world, including the USA, UK, India, Brazil, France, Australia and more. Most of the USA outage reports were in the Northeast (DC and New York City), California, and the Northwest. 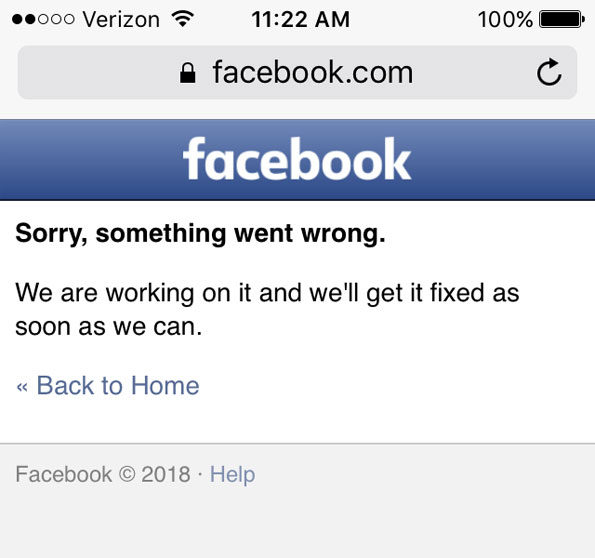 There was also a Facebook outage reported about 9:40 a.m. on Wednesday, August 1, 2018 — the day after Facebook announced they removed “bad actors” associated with “inauthentic behavior.”

There is no initial news of any connection, but today’s Facebook outage comes four days after Facebook announced it removed a network of suspected Russian-linked accounts and pages involved in organizing political events in the United States. According to Facebook, the clandestine network is the most extensive effort discovered so far that interfered with American politics.

Facebook has been working to make the social media service safer and more secure in time for the November 2018 midterm elections. Facebook reported they took down suspicious pages that had more than 290,000 followers. The Facebook pages with the most followers were “Aztlan Warriors,” “Black Elevation,” “Mindful Being,” and “Resisters.”

Facebook has told lawmakers that it suspects a Russian group is behind more than 30 pages pushing US political stances. One page promoted a “No Unite the Right 2” march, which was a counter demonstration to a planned “Unite the Right” event on the one-year anniversary of the march in Charlottesville. A woman was killed in Charlottesville when she was run over intentionally during a protest. There was also an effort by the Russian group to promote the “Abolish ICE” message by liberals.

Facebook reported that the “Resisters” page, which organized the “No Unite the Right 2” event, recruited real activists who “unwittingly helped build interest in” the event, and were fooled into posting logistics “information about transportation, materials, and locations so people could get to the protests.”

Nathaniel Gleicher, head of cybersecurity policy at Facebook, said in an official post (Removing Bad Actors on Facebook) on Facebook newsroom section that “these accounts went to much greater lengths to obscure their true identities than the Russian-based Internet Research Agency (IRA) has in the past.”

The security changes by Facebook and the countermeasures taken by Russian “bad actors” leads to suspicions that insiders at Facebook may possibly have tipped off the bad actors. Or the Russian bad actors simply acted more cautiously this time.

“It’s clear that whoever set up these accounts went to much greater lengths to obscure their true identities than the Russian-based Internet Research Agency (IRA) has in the past. We believe this could be partly due to changes we’ve made over the last year to make this kind of abuse much harder.”