A man identified as a suspect in a fatal shooting outside a Walgreens at 1180 South Roselle Road in Schaumburg surrendered to police with his attorney Wednesday afternoon. The suspect’s name was not immediately released by police

Quentin Tillison, 37, was involved in a dispute with a man in front of the Walgreens on South Roselle Road just north of Wise Road about 5:15 p.m. when Tillison was shot in the abdomen, according to Schaumburg police.

Tillison ran into traffic of southbound Roselle Road after running across the parking lot and collapsed in the road about 200 feet north of Wise Road.

Tillison was transported to Lutheran General Hospital in Park Ridge, where he died at 2:41 a.m.

Police were told the suspected shooter left the scene in a white or light-colored SUV. Police were also told the two men were acquaintances.

Search warrants were executed Wednesday morning at homes on Cambridge Drive just east of Braintree in Schaumburg, and on Century Point Lane in Glendale Heights. The suspect was not found at either residence, police said.

In Schaumburg, police surrounded a house on the east side of Cambridge Drive, including an area of a creek at the rear of the house. Police announced four times that they had a search warrant and were going to enter the house. Police pointing rifles at the house were seen approaching the front entrance of a home with white siding.

They entered the house after possibly four armored Bearcat vehicles pulled up to the house or the street in front of the house, according to a witness.

A witness said that family members were transported away from the house in police vehicles, but they didn’t appear to be in custody. The witness did not see anyone taken away in handcuffs.

Police confirmed that they executed search warrants at residences on Cambridge Lane in Schaumburg and Century Point Lane in Glendale Heights in an attempt to arrest the shooting suspect connected to the shooting death of 37-year-old Schaumburg resident Quentin Tillison.

Police were urging any witnesses who were at the Schaumburg Walgreens at 1180 South Roselle Road between 4:30 p.m. and 5:30 p.m. Monday were asked to call the police tip line at 847-348-7055. Currently it is unknown if they still need those witnesses.

Detectives are continuing the investigation with the Cook County State’s Attorney Office. 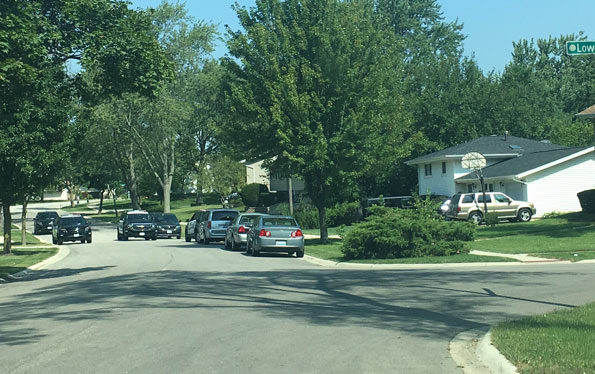