An employee of the Lamplighter Inn Tavern, who identified himself as “Security” after applying what appeared to be a “Carotid Restraint” maneuver on a man in the bar, has been charged by Palatine police with placing a chokehold on the 30-year-old Wheeling man, until the man fell to the floor. Palatine police say that when the Wheeling man fell to the floor, the Lamplighter employee, Adam Sobanski, struck the victim in the face repeatedly with a closed first, causing extensive injuries to the victim’s face and head.

Police say they responded to the Lamplighter Inn about 2:00 a.m. on Saturday July 8, 2017 to a report of unwanted subjects. Upon arrival to Lamplighter Inn, 60 North Bothwell Street, police say they discovered a man with significant injuries to his face and head. The injuries to the victim’s face and head required medical attention at a local hospital. Palatine firefighter/paramedics also responded to the scene, but it was not confirmed whether paramedics transported the victim to the local hospital.

Police investigated allegations that the injuries were suffered by the Wheeling man after he was confronted by security staff of the Lamplighter Inn tavern. Palatine police say that Adam Sobanski was responsible for inflicting the injuries to the male patron.

Adam Sobanski, of the block of 2200 North Rand Road, Palatine, was arrested by Palatine Police on Wednesday July 19, 2017 following the police investigation.

The identity of the bar patron victim was previously released by his attorney. Mark A. Brown, a partner with Lane & Lane LLC in Chicago said on Monday that his client, Alan Chislof, suffered a concussion and had a cut above his left eye that required stitches. Brown added that Chislof still had broken blood vessels in his eyes.

Brown also said Chisolf had black and blue marks all over his face, and has been spitting up blood. Brown said Chisolf’s face was mangled after the incident.

Prosecutors say handprints were visible on Alan Chislof’s neck, and that Chislof suffered a concussion, broken nose, black eyes and other injuries on July 8, 2017 at Lamplighter Inn. 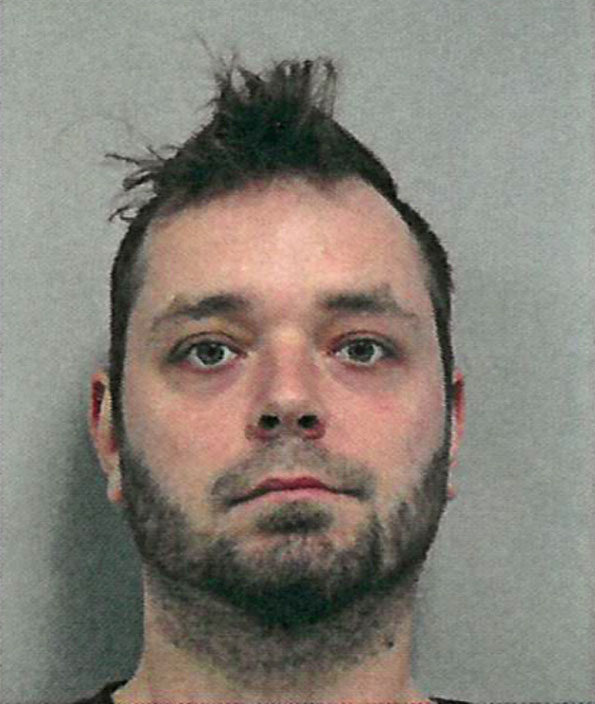 Adam Sobanski, 32, of Palatine is charged with two counts of Felony Aggravated Battery. Sobanski was taken to a bond hearing at the Cook County District 3 Courthouse in Rolling Meadows on Thursday, July 20, 2017

If convicted, felony aggravated battery is punishable by up to five years in prison. Probation is also available.

VIEWER DISCRETION: “American Idol” alum Haley Reinhart’s friend was choked so hard that his entire face was reddish-purple during an asphyxiation/strangulation maneuver that also caused Reinhart’s male friend to collapse to the floor, before Haley Reinhart was arrested for allegedly punching a bouncer.

In a video obtained by TMZ, Chislof appears to be under restraint by at least three large men in red shirts while a man wearing a purple shirt has a frontal neck grip on Chislof that appears to be a “Carotid Restraint.” The technique, known as a “Carotid Restraint” or a “sleeper hold” is a form of strangulation that compresses one or both carotid arteries responsible for critical blood flow to the brain. The technique, temporarily applied, can cause cerebral ischemia and a temporary hypoxic condition in brain tissue. A correctly applied carotid restraint/sleeper hold can cause unconsciousness within a few seconds, or can cause symptoms that will result in fear and submission of the victim. The technique, when done correctly, usually does not compress the airway, but when applied incorrectly, the technique can block the airway as well, and can even cause a potentially fatal fracture of the larynx or a fatal fracture of the hyoid bone of susceptible victims.

On the night of the disturbance, Haley Reinhart was with a group of friends, including Alan Chisolf. She was arrested on the street in front of Lamplighter Inn after the disturbance inside the tavern. Reinhart was charged with battery, following an allegation by another male member of the Lamplighter security staff that said she struck him in the head with a closed fist.