Arlington Heights Ford hit a major milestone last week when the dealership and its team celebrated its 25th consecutive President’s Award win. While this alone is an important milestone, consider this: no other dealership in the country has been honored for 25 consecutive years, making this milestone a little more meaningful.

“In order to achieve the President’s Award, dealers must exceed customer expectations every day in every department. The pursuit of excellence is not for the faint of heart – it requires passion, tenacity and, of course, hard work. This prestigious award salutes those top-performing Ford and Lincoln dealerships that embrace these philosophies, achieving among the highest levels of customer satisfaction – in both sales and service – in automotive retailing,” said Regional Ford Representative Tina Ferri. 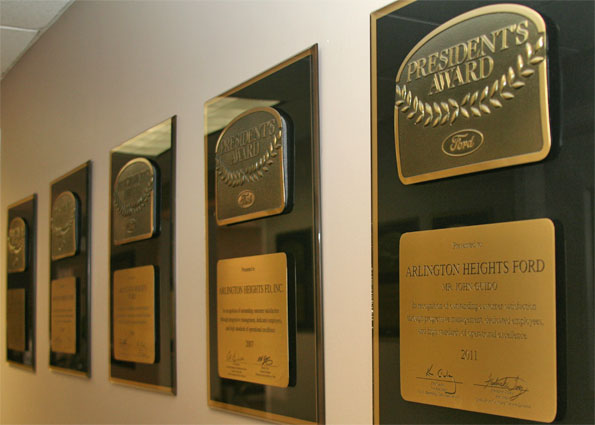 A row of award plaques from recent years at Arlington Heights Ford — part of the 25 consecutive years of winning the Ford President’s Award.

Owners John Guido Sr. (principal) and Tony Guido (general manager) together with John Guido Jr. (general sales manager) give credit to their team for this honor, some who have worked with them since they first opened the doors in 1984. They say it’s the team that makes the Arlington Heights Ford experience a unique one.
“Our people really make the difference,” said John Guido Jr., ”and when you’re here, you can feel it. We’re convinced that they are the reason the Arlington Heights community consistently gives us exceptional sales and service ratings.”
That might be the case, but the Guido family takes their roles as leaders seriously as well. In fact, you’ll never visit the Arlington Heights Ford dealership without a Guido on site. It’s a distinction that is unique among dealerships. “There’s always one of us in the building,” Guido said. “And we’re not hiding behind a desk. We’re on the floor talking to guests, meeting people, and solving problems.” He added, “In any business there will be issues, but how you resolve them is what defines you as a business.”

So what sets Arlington Heights Ford apart?
While it might sound cliché, the dealership operates on one core value: the good old fashion Golden Rule. Their mission to ‘treat all as honored guests everyday’ can be found posted, often conspicuously, in all corners of the building. It’s a topic of discussion at each day’s morning staff meeting, when the team talks strategically about what’s going right and what challenges they anticipate. And it’s that proactive approach that makes the Arlington Heights Ford experience different. 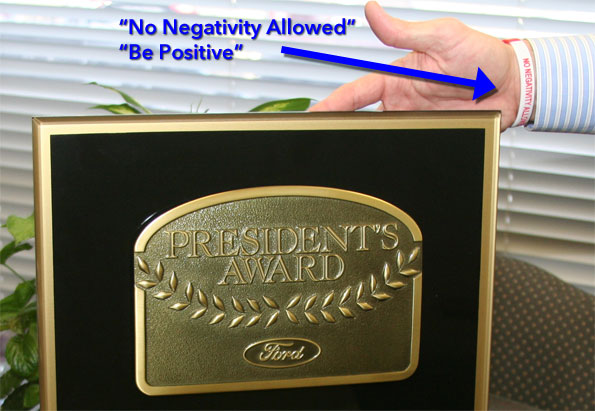 John Guido, Jr. holds up the President’s Award with a glimpse of the “Be Positive/No negativity Allowed” bracelet representing the attitude that is embraced every day at Arlington Heights Ford.

There’s another rule behind the success of Arlington Heights Ford that’s engraved on a bracelet — “BE POSITIVE” on one side and “NO NEGATIVITY ALLOWED” on the other side. Every staff member and John Sr., Tony, and John, Jr. wear the bracelet every day, since the idea was inspired by John Guido, Jr. several years ago. John Guido, Sr. says he wants the phrases to be a reminder every day.

When asked if this past severe Winter hurt sales. Guido, Sr. said that every Winter hurts sales. During October, November, December, and January sales slow down every year,” said John Guido, Sr. “But we know that in February, the largest car show in the world is coming to Chicago.” That starts to build the excitement. All winter long, sales staff still work hard clearing snow off cars in the parking lot and performing other tasks, without as many sales happening. It’s not easy. But when February arrives, sales start increasing, and you can see that Guido, Sr. still gets excited about the effect of the Spring season on the dealership.

When asked about the Internet, you might expect a vague answer from the senior Guido (pronounced “Guide-O”) using the word “delegation” with an explanation about leaving the Internet operations to the younger generations. But Guido, Sr. is well versed on the in-house Business Development Center (BDC), where staff are responsible for Internet leads and sales generation. He reports that the Internet is 60-70 percent of the Arlington Heights Ford dealership’s business. He is also very proud of the staff that works in the BDC, and the way sales are coordinated with the sales staff in the showroom. “The BDC is a big part of the success of Arlington Heights Ford,” explains John Guido, Sr.

Successful business philosophies account for the success at Arlington Heights Ford. The Guido family knows how to maximize and conserve their own human energy for the business. When asked if the family talks about the dealership at the dinner table or during Thanksgiving, for example, Guido, Sr. was quick to answer. “We toast the dealership, but we don’t talk about business at the dinner table,” he said. He believes when you walk out of the business, you leave your problems at work because family comes first.

Arlington Heights Ford also has a strong, ongoing relationship with the community, and giving back is just the way they do business. Last year, the dealership donated more than $45,000 in automotive parts to a local nonprofit, the Collision Repair Educational Foundation in Hoffman Estates, to give students the opportunity for more hands-on experience in the classroom. They also pioneered a partnership with Backpacks 4 Class, an organization that collects and distributes school supplies to under-resources students in the Northwest Suburbs. It’s these initiatives that remind Arlington Heights residents that Arlington Heights Ford is more than just a car dealership; it’s a member of the community.

To celebrate this one-of-its-kind honor, the Guido family knew they wanted to do something a little different. Rather than waiting for the award presentation in August hosted by Ford Motor Co., they decided to throw a party. A big party.
On Saturday, more than 170 sales and service team members and their families were invited to Maggiano’s for an appreciation dinner and award ceremony. Throughout the evening, employees were honored for an array of achievements, including tenure, performance, attitude, and overall contribution. They didn’t know it at the time, but many of them would receive incredible gifts in thanks for their efforts.

Staff were awarded with flat screen TVs, grills, Apple iPads, surround sound systems and more. Special awards went to staff that were evaluated to have exceeded expectations in sales and service for the past two years. One staff member, an avid golfer, received a set of Callaway golf clubs for his exceptional performance award. Every employee also received a Waterford Vase.

“We handed out really fabulous prizes that our team members might not have purchased for themselves,” said Guido Jr. “It was our way of saying thanks, and the evening was just as we envisioned: a real tribute to our team”
Adds Guido Jr., “Everyone is number one in something, but we’re number one in what matters most – the customer.”

And Guido recalls his customers. There are some that have bought 30 cars since John Guido, Sr opened the business in 1984. And some loyal customers travel 15-20 miles to do business with Arlington Heights Ford.