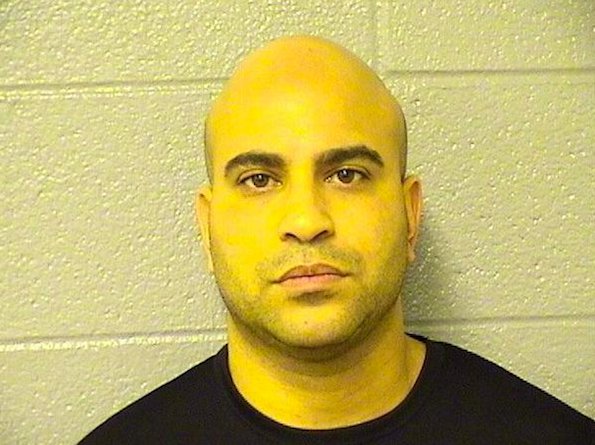 After several suspicious thefts and burglaries involving police work by Northbrook police officer Enrique Guzman, Northbrook police and the FBI began a five-month investigation that culminated in a sting operation that dispatched Guzman to a home with concealed video cameras.

FBI agents concealed three video cameras in a residence where police dispatched Guzman. The cameras were positioned to monitor the front door, the kitchen, and a bedroom, where a jewelry box with a fake diamond ring inside was placed on a dresser in the bedroom.

Guzman was assigned to investigate improper security security involving an open front door at the residence Wednesday, January 30, 2013 at 3:45 p.m. and arrived in a Northbrook police car within a few minutes. The 12-year veteran of the Northbrook Police Department was wearing civilian clothing and was carrying a firearm. He entered the house and was captured on video removing the jewelry, and placing it in his pocket.

Guzman, a full-time patrol officer since May 2001, was called in to report to Northbrook Village Hall, where FBI agents were waiting for him for an interview and explanation of his actions. He told investigators that he took the jewelry to give to his girlfriend. He still had the specified jewelry in his pocket during the FBI interview.

Northbrook Police Officer Enrique Guzman, 34, was charged with felony counts of residential burglary and official misconduct on Thursday morning. He has also been placed on unpaid administrative leave.

Bond was set at $30,000 with conditions that he turn in his firearms, his FOID card, and a passport. The court secured a condition of electronic monitoring if Guzman posts bond.