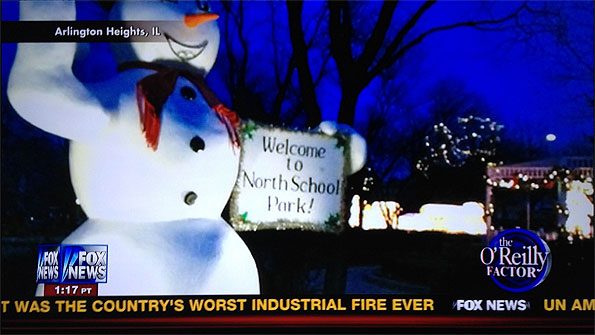 Arlington Heights North School Park has been in the national media this past few weeks, including “The O’Reilly Factor” on Fox News Channel, regarding a controversy over permission to put a private Nativity Scene on Arlington Heights Park District property as part of the holiday display of lights, toys and other holiday decorations during the Christmas season.

The First Amendment to the United States Constitution is part of the Bill of Rights (the first ten amendments). The First Amendment prohibits the making of any law respecting an establishment of religion, impeding the free exercise of religion, abridging the freedom of speech, infringing on the freedom of the press, interfering with the right to peaceably assemble or prohibiting the petitioning for a governmental redress of grievances.

Everyone has the right to freedom of thought, conscience and religion; this right includes freedom to change his religion or belief, and freedom, either alone or in community with others and in public or private, to manifest his religion or belief in teaching, practice, worship and observance.

The liberties of freedom of thought, freedom of religion, freedom of speech, and freedom of expression are now a vital part of international human rights law. The Universal Declaration of Human Rights (UDHR) is a declaration adopted by the United Nations General Assembly on December 10, 1948 at Palais de Chaillot, Paris. The Declaration arose directly from the experience of World War II and represents the first global expression of human rights to which all people are inherently entitled.

Two questions come to mind regarding the placement of a Nativity Scene at North School Park in Arlington Heights.

Question 1. Does placement of a Nativity Scene at the public property of North School Park involve making a law respecting an establishment of religion?

Question 2. Does restricting the placement of a Nativity Scene at the public property of North School Park impede the free exercise of religion?

On Question 1, the answer is “No” … neither the Village of Arlington Heights nor the Arlington Heights Park District has written any law or ordinance or park rules that force the respect of the religion of Christianity associated with the Nativity Scene. No law is forcing citizens to convert to Christianity, to pray, or bow, or walk past, or even look at the Nativity Scene.

On Question 2, the answer is “Yes” … restricting a Nativity Scene at North School Park impedes the free exercise of religion. The Nativity Scene is perfectly acceptable as long as it does not involve disorderly conduct, is not dangerous; and as long as the Nativity Scene has the proper liability insurance and waivers attached.

Many argue against Christmas-related displays in public places on the grounds that it originated as a pagan holiday, and that Christmas happens to be an extension of the pagan holiday(s) — “So it’s not even Christmas anyway.” Regarding the controversy of the Nativity Scene, it doesn’t matter if the faith of Christianity is wrong, or if some detail is inaccurate, or if the Christmas holiday is derived from a pre-Christian festival, such as Saturnalia — an ancient Roman festival in honor of the deity Saturn and festival of light celebrating the coming new year. Saturnalia, which originally was held December 17 and was later expanded with festivities through December 23, was finally designated as a celebration on December 25 as the Dies Natalis of Sol Invictus (the Birthday of the Unconquerable Sun). Saturnalia is among many celebrations near the Winter Solstice that atheists and others use to attempt to invalidate Christmas. Whether Christmas is derived from these pagan festivals or whether it developed coincidentally doesn’t matter. What matters is that freedom of expression, freedom of religion, freedom of thought and progressive understanding are not prohibited.

There are many arguments against public displays of Christmas traditions based on an effort to nitpick away at details and inconsistencies, but all are irrelevant minutia compared to the enforcement of the First Amendment. Among scholars of history, there is greater agreement that Jesus did truly exist, than on when Christ was born, and of course, whether Jesus is truly the Son of God, or whether God even exists. In fact, even within Christianity, there are different dates of celebration of the birth of Jesus, but this doesn’t invalidate Christmas. The original date of the celebration of the birth of Christ in Eastern Christianity was January 6, in connection with Epiphany. January 6 is still the date of the celebration for the Armenian Apostolic Church, and in the nation of Armenia, where it is a public holiday. In Greece, gifts under a Christmas tree are opened on January 1. In Italy, Spain and Germany, and the United State, to name a few countries, Christmas Day is on December 25. The lack of knowledge of the exact date of the birth of Jesus does not invalidate the existence of Christmas any more than the lack of knowledge of the exact date that the last Brontosaurus walked the earth invalidates the existence of dinosaurs.

Atheists and some agnostics declare they are offended by placement of religious displays, artifacts and symbols in public places. Some believe the displays coerce people to believe they must be Christian or act as Christians, even though there is no law forcing the respect of an establishment of religion. Yes, Christians believe that Jesus Christ was conceived by the Holy Spirit, born of a virgin, performed miracles, founded the Church, was crucified and died to achieve atonement (which makes possible the reconciliation between God and creation), rose from the dead, and ascended into heaven, and that Christ will return. Is it a far-fetched fable or myth? There are many that believe the whole story of Christianity — from Jesus being born from a Virgin to rising after the dead — is one of the biggest frauds of all time. But there are many churches in town with followers that follow with faith the multiple reports of the birth and life of Christ and the belief of Christianity as central to their religion.

Most of the “War on Christmas” camps come from atheists, secular humanists and progressive liberals who believe expressing Christmas on public property is scoffing at the whole idea of separation of Church and State. Some believe that prohibiting Christmas Displays protects “victims” who may feel obligated to the spirit of Christmas or coerced to the religion. To these “protectors” the “victims” are apparently too weak to resist or interpret correctly the message of Christmas. The opposition is not so much from other religions, such as Judaism, or Buddhism or Islam; or the heritage-honoring celebration of the ideology of Kwanzaa — perhaps because the members of those religions and groups would reserve the right to exercise the expression of their religion or pagan celebrations. Some day, maybe other religions and pagan groups will represent their observances at North School Park, which has already successfully represented many forms of artwork at art fairs for several years.

“Peace on Earth, Good Will Toward Men (where men means all human beings) or “On Earth Peace to Men of Good Will” is central to the Nativity Scene. The Annunciation to the shepherds is an episode in the Nativity of Jesus described in the Bible in Luke 2, in which an angel or angels tell a group of shepherds about the birth of Jesus. Many more angels are alleged to have appeared, praising God with the words “Glory to God in the highest heaven, and on earth peace to those on whom his favor rests.” Also recorded in the Gospel of Luke, shepherds are reported to have been terrified by the appearance of the angel while they were tending their flocks in the countryside near Bethlehem. The shepherds are reported to have traveled to Bethlehem, and found Mary and Joseph and the infant Jesus lying in the manger. The Adoration of the shepherds and the arrival of the Magi — the Three Wise Men, Melchior (a Persian scholar), Caspar (an Indian scholar), and Balthazar (an Arabian scholar) bearing gifts of gold, frankincense and myrrh — then occurred at the Nativity Scene.

The four Cardinal Virtues are:

Prudence (Wisdom)
The ability to judge between choices to act appropriately at a given time.

Justice
The perpetual and constant will of rendering to each human being, his or her rights.

Fortitude or Courage
The forbearance, endurance, and the ability to confront fear, uncertainty and intimidation by individuals or government.

Temperance
The practice of self-control, abstention, and moderation, as from Aristotle for example, the desire for nourishment (hunger/thirst), taste, sex, smell, hearing, and vision; and wanting things or experiences other people have endorsed.

The Latin word “cardo” means hinge, and also applies figuratively to the principal or chief moral concept which other morals depend, or to the hinge of the door, which the moral life swings during turning points, critical moments or actions.

On the Lighter Side …

A Nativity Scene is expected to be permitted at North School as early as this week and on display this upcoming weekend.

Tom Brejcha, the founder and President and Chief Counsel of the Thomas Moore Society — a not-for-profit, national public interest law firm based in Chicago that exists to restore respect in law for life, marriage, and religious liberty. In the Arlington Heights issue, the law firm is working to ensure the freedom of express of religion in a public square. The law firm is not to be confused with the Thomas More Law Center, based in Ann Arbor, Michigan, which has different key issues, but perhaps similar values.

Maryfran Leno is the Arlington Heights Park District Board President, on record saying the Nativity Scene was “inconsistent with the park district’s long-standing practice of using only its own property in the display” … “We said thank you very much, but no thank you,” Leno said. (Daily Herald/Nov. 23, 2012).

Rob Sherman, the Buffalo Grove resident, political activist, and atheist, who attended the most recent Arlington Heights Park District board meeting urging members not to approve the request, calling the actions by the Thomas More Society a “scam” and a “bluff.” Sherman has opposed the placement of Christian crosses on village stickers in the Illinois cities of Burbank, Rolling Meadows and Zion. He threatened a lawsuit in 1987 against the park district in Zion, Illinois causing the park district to move the Nativity scene to private property. 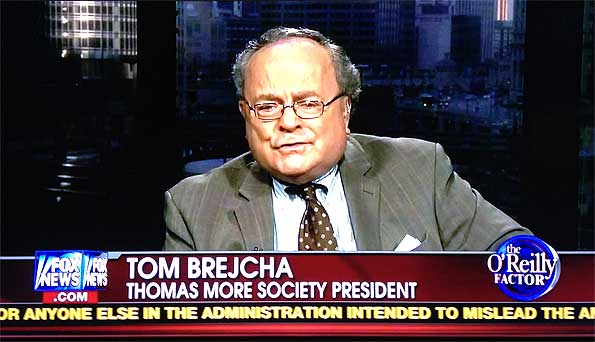 Tom Brejcha, Thomas More Society President, on the O’Reilly Factor explaining his representation of Jim Finnegan in efforts to have a Nativity Scene displayed at North School Park.

Visit NBCNews.com for breaking news, world news, and news about the economy

For nearly 60 years, the city of Santa Monica has presented a series of dioramas featuring Nativity scenes, but this year, rather than fight with the atheists, the city has decided to eliminate the tradition of hosting the displays. Atheists say they are offended by the use of public land for display of religious scenes.