Apple iOS 6, which Apple released to the public last week with the new iPhone 5 is also available as an update for users who have iPads, an iPod Touch and past models of the iPhone.

For those that might upgrade, there is one big detail that Apple shamefully does not reveal as it encourages users to upgrade: There is no Google maps app, and the new Apple map is much inferior. Some people have been totally surprised that their beloved Google Maps app and the YouTube app from Google are both gone. The YouTube app can be downloaded from the Apple App Store, but so far there is no new Google Maps app.

This update contains over 200 new features, including the following:

There is no mention that the Google Maps app is no longer included. Of course, many people who stay informed with tech news websites already new about the lack of a Google Maps app.

Apple chose to drop Google and go with a new “Maps” app, a service Apple built in conjunction with GPS mapping company TomTom. According to an Apple Store employee, the reason is that Apple wanted to integrate the Tom Tom turn-by-turn functions and integrate map commands with Siri. They had no control of the implementation into the Google Maps app.

The first most obvious problem is the there is no Google Street View, and Apple’s 3D view is in no way an adequate substitute. Apple has not had any Apple street view cars driving around getting panoramic pictures like Google has been doing for years. This is a big deal for people looking to see what a neighborhood is like, whether they’re planning to buy a house or check the safety prior to a visit.

A third major problem is that the satellite views are missing data or showing the wrong data. For example, Willis Tower in Chicago is still listed as Sears Tower, and the 3D flyover view doesn’t even show the actual Willis Tower because its not showing the correct location. 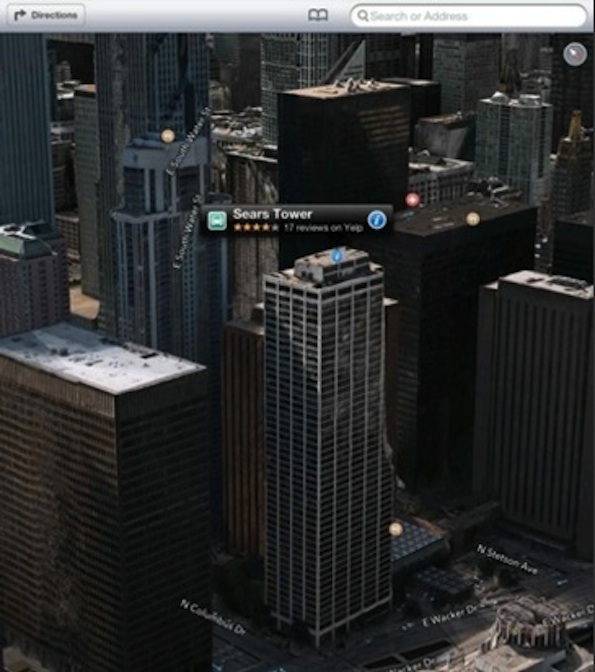 Wrong Building and Wrong Location and Wrong Name: The new Apple Map app shows the Sears Tower, which is now known as Willis Tower at East Wacker Drive and North Columbia Drive by the Chicago River (about 1.4 miles away).

A fourth problem is missing public transit information. There is no integrated bus, subway or train information that is crucial to people who are mobile and use public transportation.

A fifth problem is a low quality turn-by-turn 3D driving interface. There is no road speed or speed limit indicator. The ETA and “distance remaining” indicator is very small and unreadable in a driving situation in the top status bar.

A sixth problem is that the color coded traffic indicators (red/heavy, yellow/somewhat congested, and green/smooth sailing) that the Google maps app has are gone, too.

On September 25, 2012 Google’s Executive Chairman Eric Schmidt is quoted saying that there are no plans for a new Google Maps for Apples App Store.

Part of the source of the problem is Google’s fault. Turn-by-turn navigation has been available for years on Android phones, as well as the ability to turn the onscreen map around to orient the map to what you’re seeing in the real world. Google wouldn’t license turn-by-turn navigation to Apple under the terms of the Google Maps API. Apple got huffy about that, and kicked the Google Maps app off of its home screen.

There are some rumors that a Google map app for Apple is in the wings, but it’s not confirmed. The new Google Map app for iOS 6 would have to be approved by Apple Inc. Meanwhile Google is enjoying the bad press that is hammering Apple.