VIDEO: Train derailment aftermath on Shermer Rd with neighbor reports of the sound and vibrations of the crash, and a police press conference from Glenview Deputy Chief Phil Perlini.

A second body was found Thursday inside a car that was covered with coal and train cars that piled onto Shermer Road on Wednesday, July 4, 2012 about 1:40 p.m. Railroad crews, crane crews and excavation crews were working to clear debris when an attached vehicle bumper appeared about 11:30 a.m. Thursday. Major excavation to remove coal and wrecked railroad cars was immediately discontinued at the crash site on Shermer Road between Willow Road and Holste Road. Rescue/recovery workers switched to hand shovels and cleared a windshield about 1:00 p.m. Two bodies were found in the car and the vehicle was immediately covered by a blue tarp. Only one of the bodies was described as a male. From the view of news helicopter images the vehicle appeared that it might have been in the southbound lane of Shermer Road directly under the bridge, but a little bit to the north of directly center under the bridge. The entire car was placed on a flatbed truck with the bodies in the vehicle.

Paramedics were also called for a railroad worker that became ill at the scene Thursday morning.

Initially authorities reported there was no vehicle under the debris. On July 4th, Glenview and Northbrook firefighters and police officers responded about 1:40 p.m. to the report of the train derailment at the Shermer Road bridge just south of Willow Road. No injuries were reported. Apparently emergency responders worked on a witness report that no vehicle was buried in the rubble and coal. An engineer and a conductor were on board the locomotive, which was safe on the tracks almost one mile southeast of the collapsed bridge and wrecked train cars and just east of the intersection of Glenlake Drive and Winchester in Glenview. About 20 coal cars had passed the bridge before the incident occurred.

The pile of train cars was multi-level with piles of coal spilling onto the embankments, road, and shoulder below. The pile of debris could have covered more than a few vehicles passing underneath on Shermer Road.

The stretch of railroad tracks does not carry passenger trains.

Investigators believe the train derailed and then the bridge collapsed under the weight of the extra coal cars piled on the bridge. The pile up of about 27 coal cars filled with coal appeared larger than a train wreck that occurred November 1, 2009 at the same location. An 18-car freight train derailed — closing Shermer Road for nine days. The bridge viaduct did not collapse, and was reported to be structurally sound, and not a contributing factor to the derailment. The 2009 derailment was caused by a defective wheel assembly (VIDEOS from the 2009 incident Glenview Northbrook Train Derailment North Division and Glenview Northbrook Train Derailment South Division).

Bridge work for the railroad over Shermer Road last year, which was originally planned to start on June 6, 2011 and last 60 days, started in late June 2011 and ended early October 2011. The repair involved installing new braces and repainting the viaduct, but not major structural repairs.

A fire possibly caused by downed power lines and fueled by dry brush on the north side of the ex-bridge was quickly extinguished by Northbrook firefighters. An extra alarm MABAS Division 3 Box Alarm was called, but the alarm was quickly struck out. Firefighters from Glenview, Mount Prospect, Wheeling and other communities assisted Northbrook Fire Department.

Phil Perlini, deputy chief of the Glenview police department at the scene, and speaking at a press conference, said Shermer Road is expected to be closed ‘for months.’

Glenview residents in Princeton Village, a gated community just northwest of the crash, reported that they heard a particularly loud rumble. The rumble was much louder than the usual rumble of a fast-passing train. 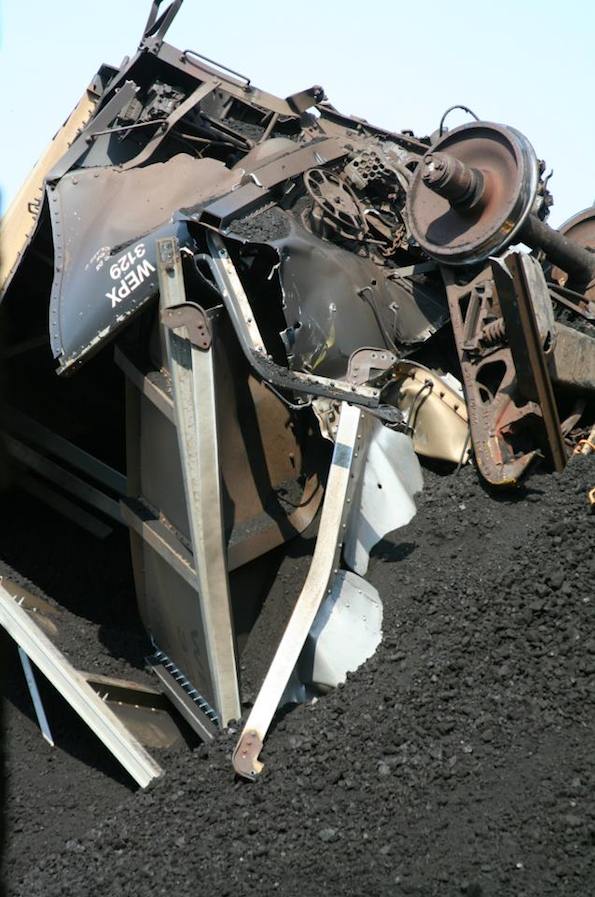 View Larger Map
Spilled coal on the north side of the Shermer Road railroad bridge. See over 160 more photos.