VIDEO of animal tracks discovered on the north side of Arlington Heights on Monday, February 27, 2012 showing a large pawprint that is wider than long in a ‘direct register’ gait with long stride.

Cougar sightings were reported in Lake Forest in October 2011, and a stray cougar was shot in Chicago in 2008. That makes the discovery of these animal tracks in Arlington Heights very interesting.

The video (above) shows animal tracks that were discovered Monday, February 27, 2012 about 2:00 p.m. The stride of the tracks measures a distance of over three feet. According to A Field Guide to Mammal Tracking in Western America (page 45), the stride of a mountain lion is 40 inches. The tracks might have been double tracks representing the animal’s forefoot and hindfoot strike into the snow in approximately the same area. This gives the look of one huge pawprint. Cougars are known to walk with their hind feet directly landing inside where their front feet landed. The gait is called direct register, and is especially used by cougars when moving in deep snow. However, dogs are also known to move in a direct register gait. 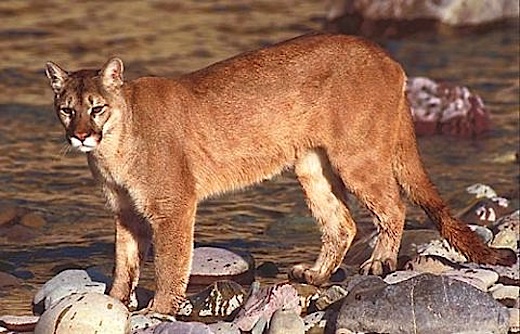 Cougars are also known as mountain lions, and are mammals that are members of the family Flidae — native to the Americas. Cougars are similar to house cats, but are about the size of adult humans. Primary food sources of cougars include deer, elk, moose, and bighorn sheep, as well as domestic cattle, horses and sheep. Cougars will also eat rodents. Cougars are solitary, reclusive cats and usually avoid people, but attacks on humans have been known to occur.