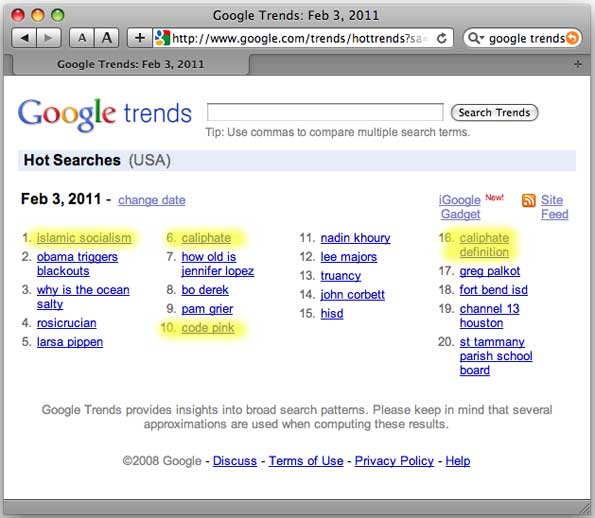 Islamic Socialism, Caliphate, and Code Pink (all highlighted in yellow) were discussed on the Glenn Beck show Wednesday. Caliphate Definition (#16) was also searched.

Glenn Beck is proposing that recent incidents in Yemen, Egypt and other areas of the Mideast are significant signs of Islamic radical efforts toward a Caliphate — from North Africa across the latitude to Afghanistan.

Beck is also proposing that what main stream media is describing as a friendly democratic revolution associated with the Muslim Brotherhood, is actually an effort of planned revolution toward a Caliphate — with revolutionaries waiting for people to be hungry and unemployed, are ready to fuel the populous anger, and use them like useful idiots.

Beck also showed clips from a Code Pink demonstration captured by Breitbart.com where an apparently angry man from Chicago said it was time for an Egypt-like revolution here in America. The video also showed a comment by a leftist demonstrator that recommended Supreme Court Justice Clarence Thomas be impeached and sent ‘back to the fields.’ He also pointed out that Code Pink had a banner ad on the Muslim Brotherhood which made reference to the protest giving opportunity to ‘cleaning’ Egypt. Beck thought the word ‘cleansing’ was a bad choice of words, considering nearby neighbors in Israel have seen their share of ethnic cleansing.

Visit msnbc.com for breaking news, world news, and news about the economy