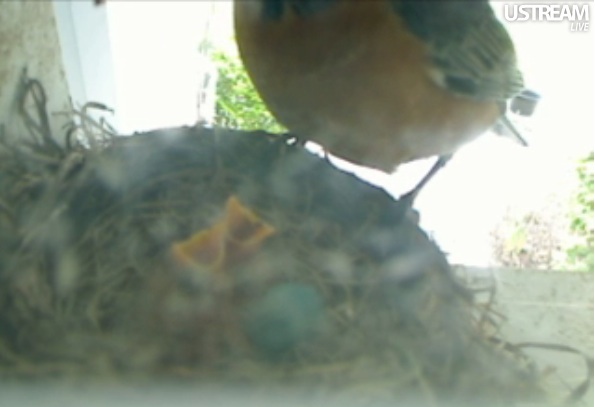 Two or three of three eggs have hatched.

The owners at 3GSTORE.COM — a leading online 3G wireless communication products store — are always experimenting with their technology. Check out their webcam (update: webcam closed down now) in Cary, Illinois showing the nest of an American Robin.

The American Robin begins to breed shortly after returning to its summer range. It is one of the first North American bird species to lay eggs, and normally has two to three broods per breeding season, which lasts from April to July.

The nest is most commonly located 1.5–4.5 meters (5–15 ft) above the ground in a dense bush or in a fork between two tree branches, and is built by the female alone. The American Robin does not shy away from nesting close to human habitation. Nests are also commonly built near coach lights or other man-made structures near patios and porches. The outer foundation of the nest consists of long coarse grass, twigs, paper, and feathers. This is lined with smeared mud and cushioned with fine grass or other soft materials. A new nest is built for each brood, and in northern areas the first clutch is usually placed in an evergreen tree or shrub while later broods are placed in deciduous trees.

Newly hatched chicks
A clutch consists of three to five light blue eggs, and is incubated by the female alone. The eggs hatch after 14 days, and chicks leave the nest a further two weeks later. All chicks in the brood leave the nest within two days of each other. The altricial chicks are naked and have their eyes closed for the first few days after hatching. While the chicks are still young, the mother broods them continuously. When they are older, the mother will brood them only at night or during bad weather. Even after leaving the nest, the juveniles will follow their parents around and beg food from them. Juveniles become capable of sustained flight two weeks after fledging.

Chick
The adult male and female both are active in protecting and feeding the fledged chicks until they learn to forage on their own. The adult Robin gives alarm calls and dive-bombs predators, including domestic cats, dogs and humans that come near the young birds. The fledglings are able to fly short distances after leaving the nest. The wings of juvenile birds develop rapidly, and it only takes a couple of weeks for them to become proficient at flying. The cryptically colored young birds perch in bushes or trees for protection from predators. Bird banders have found that only 25% of young Robins survive the first year. The longest known lifespan in the wild of an American Robin is 14 years; the average lifespan is about 2 years.

General Info
The American Robin (Turdus migratorius, also called North American Robin) is a migratory songbird of the thrush family. It is named after the European Robin[3] because of the male’s bright red breast, though the two species are not closely related. The American Robin is widely distributed throughout North America, wintering south of Canada from Florida to central Mexico and along the Pacific Coast. It is the state bird of Connecticut, Michigan, and Wisconsin. It has seven subspecies, but only T. m. confinis in the southwest is particularly distinctive, with pale gray-brown underparts.

The American Robin is active mostly during the day and assembles in large flocks at night. Its diet consists of invertebrates (such as beetle grubs and caterpillars), fruits and berries. It is one of the first bird species to lay eggs, beginning to breed shortly after returning to its summer range from its winter range. Its nest consists of long coarse grass, twigs, paper, and feathers, and is smeared with mud and often cushioned with grass or other soft materials. It is among the first birds to sing at dawn, and its song consists of several discrete units that are repeated.

The adult robin is preyed upon by hawks, cats and larger snakes, but when feeding in flocks, it is able to be vigilant and watch other birds for reactions to predators. Brown-headed cowbirds, known as a brood parasite, lay eggs in robin nests, but robins usually reject the cowbird eggs.