Lee DeWyze announced winner of American Idol Wednesday, May 26, 2010 at 9:00 p.m. After performing with Chicago Does Anyone Really Know What Time It Is, If You Leave Me Now, 25-or-6-to-4 Lee DeWyze won a tight contest. Almost all former American Idol winners were on hand for the performance.

Congratulations! Lee DeWyze wins! The first time that anyone from the Chicago area has made it all the way.

Ryan Seacrest: How does it feel to be the new American Idol?

Lee DeWyze: I don’t know. This is amazing. Thank you guys so much for everything. 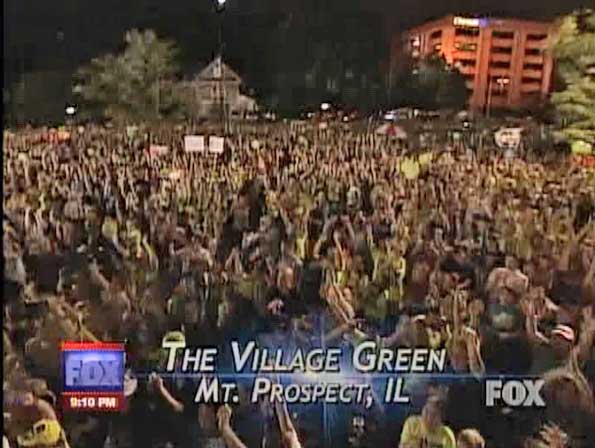 ‘Lee on the Green’ — huge turnout for outdoor party with JumboTron TV to watch American Idol at Village on the Green in downtown Mount Prospect near Village Hall.

VIDEO: Lee DeWyze leaving American Idol after party (wrap party): “I set to do a goal, and I did it … so, I’m happy … Thank you so much for everything … it’s been amazing, and I appreciate it.”