Video of firefighters with a quick knockdown of a fire at Peep’s Hot Dogs Saturday night.

Flames were shooting through the exhaust over the roof at least three feet into the air as firefighters arrived. The fire was possibly caused by grease in the exhaust, but an investigation will determine the actual cause. Prospect Heights firefighter/paramedics quickly knocked down the fire, vented the roof and cleared smoke from the building. Firefighters used a power saw to cut away some of the roof to look for extension of fire in any direction in the roof.

No injuries reported. Peep’s staff and customers were in the building when the fire occurred. All citizens were safely evacuated. 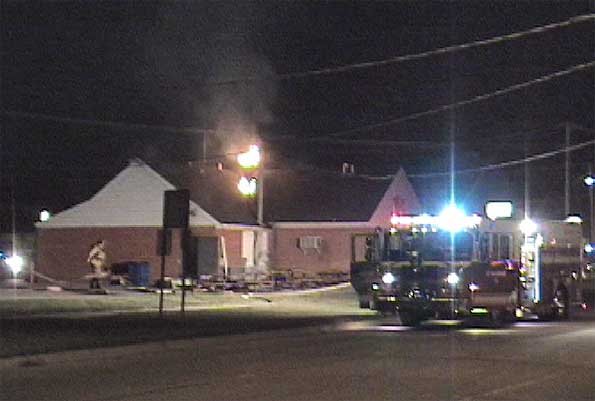 Peep’s Hot Dogs with fire showing out through the exhaust on the roof as first Prospect Heights Engine arrived on the scene.