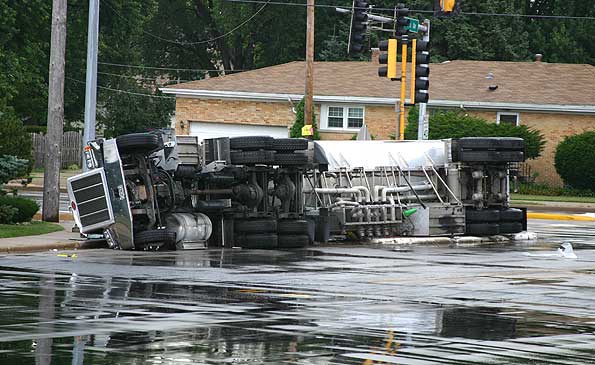 A gasoline tanker sits alone, but firefighters and environmental technicians are all surrounding the vehicle, planning how to safely offload gasoline to another tanker truck. The wet pavement is mostly water from a short rain after the rollover crash. 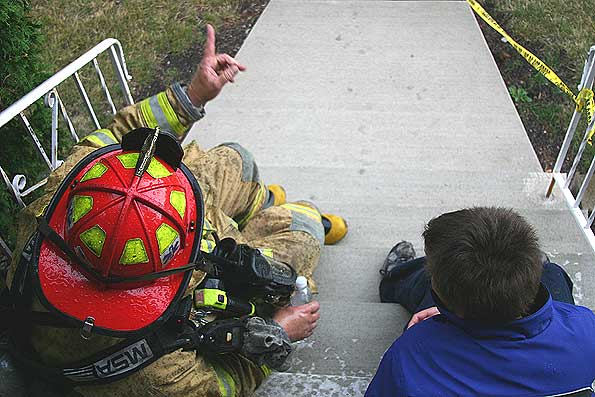 Taking a break and getting some shelter from the rain at about 10:00 a.m., a firefighter explains to a boy how they and the environmental hazmat crew technicians are going to clean up the accident.

Niles Fire Department managed a HAZMAT operation at Oakton and Harlem for a gasoline tanker that overturned at the northeast corner of the intersection. Fire command requested an urgent call for foam early this morning at the beginning of rush hour. Prospect Heights Fire Department’s Airport Crash Truck and Wheeling Fire Department’s Airport Crash truck were the first to respond to that request at about 7:20 a.m. No fire was reported as of 7:20 a.m., but the situation was dangerous as levels of gasoline and vapors near the accident scene were near explosive levels. Early reports at the scene indicated that there were about 7200 gallons of gasoline in the tanker. Chicago Fire Department responded with at least three fire suppression units and a Battalion Chief. One of O’Hare’s units that responded was Crash Tender 6-5-7.

There were no reports of any injuries to the driver of the truck. During a prolonged operation to absorb and clean gasoline from streets and underground seepage areas, one hazmat environmental technician, from a private firm was treated by paramedics. After a cool, rainy morning; the weather turned hot under sunny skies, which added the element of heat stress to firefighters, paramedics, environmental technicians and other workers. Niles Fire Department command called for additional engine crews and ambulances to assist or standby at the scene.

Traffic delays were expected to persist during the evening rush, but perhaps not as bad as the morning rush hour. At about 3:45 p.m. Nile Fire Department command started to release mutual aid companies from the scene after emptying the tanker truck of remaining gasoline. 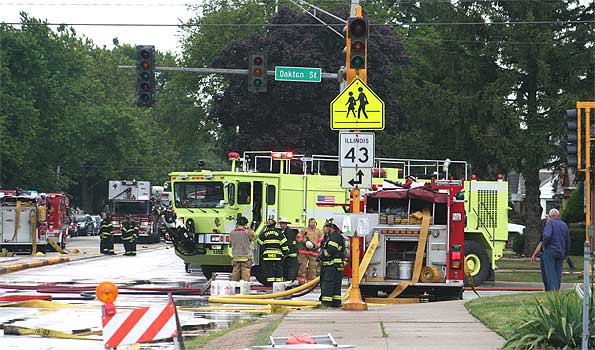 Chicago Fire Department Airport Fire Supression Unit ‘Crash Tender’ from O’Hare International Airport — the crew working to prevent a gasoline tanker explosion and prepare for aggressive suppression in case of ignition of the tanker and gasoline.

Video shows operation of a hazmat technician drilling holes in the tanker, and the video shows firefighters in protective gear standing by if any fire occurred. The video also shows the paramedics treating one the injured environmental technicians.

Com Ed cut electricity to neighborhoods in the vicinity to de-energize the electric lines and stoplights near the accident scene. A spark at an electric switch or an arc in a power line could have caused a massive explosion and fire. As firefighter’s and Com Ed workers took care of regulated electricity, fire scene commanders were kept aware of the sky by Red Center Dispatch Center who monitored a small electrical storm that passed just north of the accident scene at Harlem and Oakton. A lightning strike or the downing of power lines from the high winds of a thunderstorm could also have ignited the leaking tanker truck.

SET Environmental, the Metropolitan Water Reclamation District of Greater Chicago, and the EPA were also on the scene.

The truck was leaking gasoline, but the drain-off was held by sand dikes. Some gasoline did make it to the sewer system. Dikes and absorbent material kept the gasoline from traveling downstream to Chicago in the Chicago River. A team of workers set up absorbent material at the river near Howard Street. Teams also constantly monitored for occurrence of gasoline and for explosive levels of gasoline vapors. Drainage under the streets near the crash site were flushed with water and the water was then vacuumed into another tanker truck.

Gasoline also made its way into at least one underground traffic light control vault. A strong odor of gasoline was in the air immediately after the accident, but by 8:00 a.m. the leak was stopped at the truck, and firefighters were faced with the task of preventing an explosion, getting environmental help for cleanup, and getting help to offload the fuel from one tanker truck to another. The tanker truck had four sections with different grades of gasoline. Only one section was damaged, and it was the only compartment leaking from the crash damage.