Video of ILEAS/NIPAS Emergency Services Team activity near the command post for the standoff with a man on a roof near the corner of Wille and Gregory in Mount Prospect. 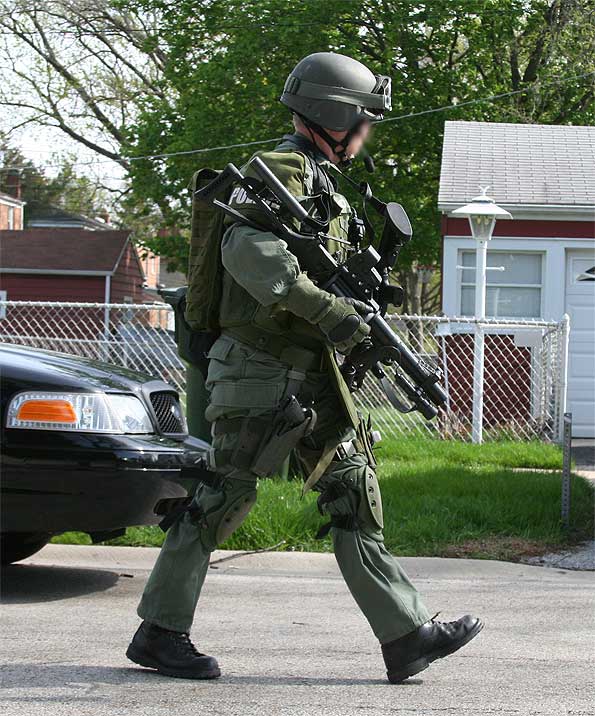 ILEAS Emergency Services Team officer en route to the scene of the standoff on Wille Street.

Mount Prospect Police Department called for the Emergency Services Team from ILEAS just after 3:00 p.m. for a SWAT response at a home near the corner of Wille and Gregory. A man in a standoff situation was reported to be on the roof of a home in the 400 block of North Wille. Other details were not available at the time of the incident.

At least 50 police cars were lined up along streets near the scene at Wille and Gregory in Mount Prospect. Police blocked the intersections of Main Street and Memory Lane, Highland and Wille, Pine and Highland, Main Street and Gregory, and Pine and Gregory. Many neighbors were outside watching the scene and many were preparing barbecues or mowing their lawns while police converged on the scene with AR-15 rifles.

The man was placed in custody at 5:20 p.m. and was taken to a Mount Prospect Fire Department ambulance waiting at the scene. He was transported to a local hospital.

Immediately after the standoff ended, word spread on the street in the neighborhood that the police had arrived to serve an arrest warrant for a man who was associated with the delivery of heroin to a girl that was killed by an overdose of heroin last summer.

YESTERDAY …
A person who identified herself as a friend of the family was asked if the situation was related to a heroin arrest. She replied that the information about the heroin arrest at the home on Wille Street is totally false. She also said that the man on the roof did not have any knives with him. She said that “this is what she hates about the media” and that people’s lives are ruined by false lies that hurt reputations and make mothers cry. She also said that nobody was arrested.

The Daily Herald and ChicagoBreakingNews.com is reporting that police spokesman Bill Roscop stated that the situation began about 1:45 p.m. when Mount Prospect police arrived to serve an arrest warrant. When the suspect saw the police arriving on his street, he shut the front door to his home and while police were ringing the doorbell, he headed out a window on to the roof carrying two large kitchen knives.

Whitepages.com lists a household with the last name of “Hall” on the 400 block of North Wille Street in Mount Prospect. Andrew Hall is known to be a former resident of Mount Prospect before he lived in Chandler, Arizona.

Shop Now and Save at Amazon.com!