The neighborhood around the 900 block of Harvard Avenue is a modest neighborhood with nice homes and hardworking people, retirees, families and children. Tuesday night and early Wednesday morning those neighborhood qualities were overshadowed. When Jason Jakob, 39, started shooting weapons inside his home, neighbors called the police. The first police officer on the scene heard multiple gunshots as he got out of the car. When a second officer arrived more multiple shots were heard. As more police arrived they peered in the windows of the suspect’s home, seeing muzzle flashes, hearing gunfire and watching him walk from room-to-room, and into his garage. Officers from different vantage points shared information about his movements in different rooms of the house and garage. At one point Jakob put on a gas mask and a military-style helmet. He also appeared to be wearing a bullet-proof vest. Harvard Avenue had started to feel a little more like the opening scene of the movie Lethal Weapon 4 when LAPD officers Riggs and Murtaugh confronted a lunatic wearing a silver fire protection suit while firing a submachine gun and a flamethrower.

Outside the Harvard Avenue home, police and neighbors were worried that a stray bullet could strike and kill a child sleeping in a quiet bedroom, or strike a dad watching Jay Leno before going to bed, or a police officer who accidentally happened to appear in an outside light while trying to assess the situation. Police set up a perimeter, blocking Oakton Avenue from Kennicott Avenue to Princeton Avenue. Harvard Avenue and Patton Avenue were blocked from Elm Street to Clarendon Road. At least thirty to forty marked and unmarked police cars lined Oakton and Kennicott Avenue near a command post near Harvard, Patton and Oakton avenues. At least three NIPAS specialized police command and tactical/rescue trucks arrived.

Inside the Harvard Avenue house was a man who lived alone. Police scurried to gather information about Jason Jakob and the layout of his home. They needed to find out if there were any hostages — as far as they could determine, there weren’t any. Jakobs, who appeared intoxicated, apparently lost judgment about using his weapons and must have thought it was O.K. to fire the weapons inside his own house. Perhaps he believed he really was shooting blanks. Or perhaps he thought a search warrant would be required to enter his home if police couldn’t determine whether live bullets were being fired. Or perhaps he thought that police would just go away. Nevertheless, a normally good neighbor’s judgment was impaired.

A profile of the neighbor started coming together. Neighbors said they were able to give the police helpful information. There were reports that he had taken expert classes in gun tactics offered by Blackwater, the private military and security tactical company with a controversial history regarding Iraq. They discovered he had a valid firearm owner’s identification (FOID) card. He had no criminal history record. They knew he was an unemployed mortgage broker. Police tried to contact Jakob, but he did not answer his phone. The apparent danger and the lack of communication prompted Arlington Heights Police to activate the Emergency Services Team from the Northern Illinois Police Alarm System (NIPAS). As police moved neighbors to safety, they began to try to find out anything neighbors might know about Jason Jakob. There were neighbors who informed police he recently had shoulder surgery. At one point police watched the suspect in his living room as he slept on his couch.

After two hours, with NIPAS taking over attempts at communication, the suspect finally answered the phone about midnight. At one point, after midnight, he told negotiators that he was firing blanks. He claimed he was playing with an old black powder gun and some blasting caps and that nothing was wrong. He asked police to leave. NIPAS replied that they couldn’t just leave, and then Jakob asked that just one officer come to the front door so he could display the black powder gun and resolve the problem. NIPAS replied that they couldn’t do that either.

Meanwhile police continued to evacuate more than 20 homes in the area. At about 2:30 a.m. they used an armored personnel carrier known as a Bearcat to pass one-house-at-a-time to block any potential line of shooting from Jakob and pickup neighbors from their homes. The neighbors were transported to the chapel at the Lutheran Home as a temporary shelter a few blocks away. The 9-1-1 center called residents to make them aware of the situation. Some residents were asked to turn out their lights. Soon Harvard Avenue was entirely dark.

When negotiations failed and all residents were evacuated just after 4:00 a.m., police fired tear gas canisters through windows into all three levels of the home — basement, first floor and second floor. Overwhelmed by tear gas, Jason Jakob exited his home, surrendered, and was arrested. Police believed he was severely intoxicated, and requested an Arlington Heights Fire Department ambulance waiting in staging to move up to the house on Harvard Avenue. Jakob was transported by paramedics with police guard to Northwest Community Hospital.

Arlington Heights police immediately found more than 30 guns and several hundred rounds of ammunition inside the home on Harvard Avenue — “mostly military assault rifles and handguns,” according to Commander Ken Galinski of the Arlington Heights Police Department. Police also found gun scopes, gun holders, gun vests and gun cleaning equipment inside the home. Several walls inside the home had multiple bullet holes and embedded bullets from shots fired during the standoff. It is believed that no bullets exited the house during the standoff. An Arlington Heights fire engine was moved up to the scene to use fans to ventilate tear gas in the home and tear gas hanging in the air immediately outside the home. By 5:30 a.m. the area was deemed safe to return residents to their homes. Rides were offered back from the Lutheran Home chapel.

Who is Jason Jakob?
As of Thursday, police have not pressed charges against Jason Jakob, who was transferred Thursday to an Elgin mental health facility. They also have not interviewed Jakob as of Thursday. So far little more information has been confirmed about Jason Jakob. One neighbor interviewed on the block described him as a nice and helpful neighbor — a “good guy”, who was having a little trouble. 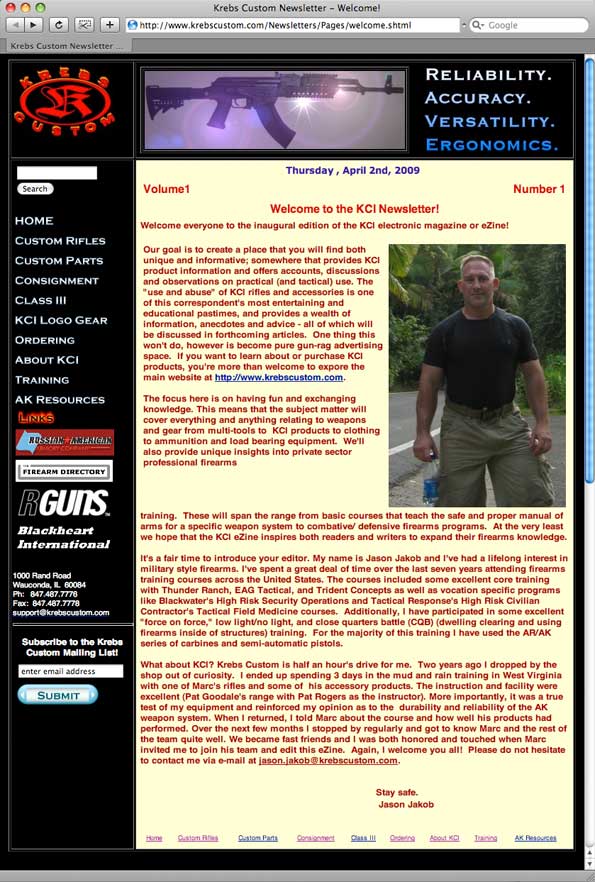 Krebs Custom Inc. (a custom gun assembler/manufacturer) web page shows a newsletter page written by a man signed Jason Jakob, but no confirmation has been obtained to determine if the identity of the man from Harvard Avenue is the same as the one pictured and identified on the web page.

A web search turns up little information about Jason Jakob. A whitepages.com search result confirms the Harvard Avenue address in Arlington Heights. Some mortgage business search results turn up Glenview and Park Ridge hits related to a “Jason Jakob.” The most detailed match for a “Jason Jakob” that is an Illinois resident, is a newsletter signed by a “Jason Jakob” on the company website of Krebs Custom, Inc. from Wauconda, Illinois. The writer describes himself as having “a lifelong interest in military style firearms.” The writer adds that he has attended firearms training courses across the United States, including “Thunder Ranch, EAG Tactical, and Trident Concepts as well as vocation specific programs like Blackwater’s High Risk Security Operations and Tactical Response’s High Risk Civilian Contractor’s Tactical Field Medicine courses.” While the image title of the photograph had a filename of “JasonJakob-250.jpg” the image has not been confirmed to be the same as the suspect of the man arrested in the 900 block of Harvard Avenue early Wednesday.

Readers are reminded that suspects are innocent until proven guilty in a court of law and that the identity of suspects is unconfirmed until court interviews and rulings confirm the identity of defendants. As of this writing, the identity of Jason Jakob and any image in this article has not been confirmed to be the same person as the man arrested about 4:30 a.m. Wednesday April 1, 2009.

While comments may come from reliable sources, readers are advised to hold the court of law as the final word on the identity and guilt of the suspect.