A white Nissan Altima and a red Toyota Prius were involved in the crash. The Nissan had front-end damage and the Toyota had damage on the driver’s door side in a “T-Bone” style crash.

One patient was transported to Northwest Community Hospital.

Snow packed traffic signals, blocking the view of red, yellow and green lights are suspected of contributing to the cause of the crash.

IDOT maintains over 2,700 traffic signals in Cook County and other Chicago collar counties, and IDOT crews have been working to clear the lights.

Since most traffic signal lights have been converted to energy-efficient LED lights, there is a one drawback. Part reason behind LED efficiency is that energy is not wasted as heat. Since the lamps in the traffic signals operate at lower temperatures, they don’t melt the snow that obscures the colored lens.

Officials are recommending that motorists take extra care while passing through intersections in case an obscured light causes another motorist to miss the red signal.

Of course it would likely be a distracted driver or fatigued driver that would pass through a controlled intersection without signal illumination. Nevertheless, the chance of a motorist’s failure to recognize or be triggered into awareness because of the lack of a visible signal is a reality. In traffic lights observed by Cardinal News, it seemed like the red light was the most obscured by snow — compared to yellow and green — and some red lights were barely visible, even when looking right at the red illuminated light. 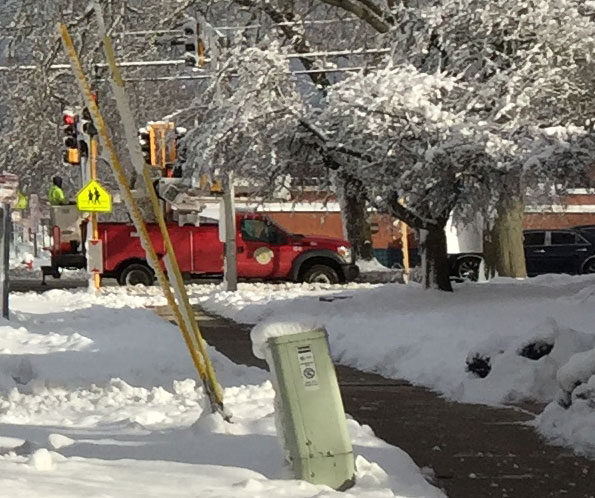