The Hunter’s Moon is tonight, Wednesday October 24, 2018, but last night’s preview was spectacular. There was plenty of twilight remaining from the setting sun as the pre-Hunter’s moon was rising above the horizon just after Moonrise 5:54 p.m. Sunset was 5:58 p.m., but the sky appeared especially bright, even about 7:00 p.m.

In autumn, the angle of the ecliptic – the moon’s path (or the sun’s path) – makes a narrow angle with the horizon, which means the moon rises more slowly toward the south as it moves across the sky from east to west. The moon appears larger near the horizon for a longer period of time. Think of a jet aircraft climbing slowly instead of a fast climb. The sun sets more slowly at a low angle incoming from the south. The slow sunset, along with the slow moonrise, gives the sky its prolonged still light as the Moon appears.

Tonight’s weather should be good for viewing the Hunter’s Moon. Clouds are expected to cover the sky at about 40 percent. The air temperature is expected to be dropping from 48°F to 45°F from 6:00 p.m. to 7:00 p.m. with the moon rising above the horizon starting at 6:24 p.m.

The Harvest moon in September is a special moon that illuminates the fields for farmers throughout the night — especially around sunset. The Hunter’s Moon provides light that helps illuminate the prey of hunters, running in the light shadows of the harvested remains of crops left behind in the fields. 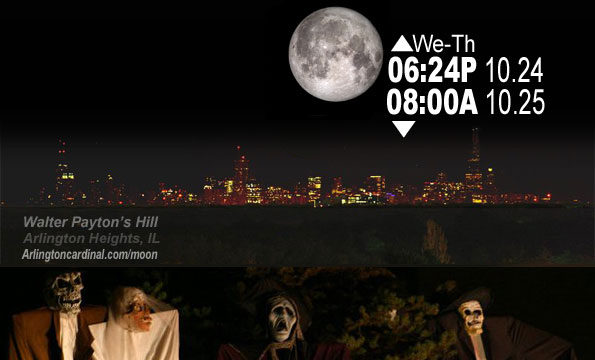 Check out this full Hunter's Moon from Mark Hackett! Did you take any pictures of the moon this week? Please share! pic.twitter.com/WFc3hZpcKY

The light of the full moon is illuminating high clouds over #Norcal. This full moon is known the "Hunter's Moon", said to give light to hunters at night. #cawx pic.twitter.com/BSi0doQXrV 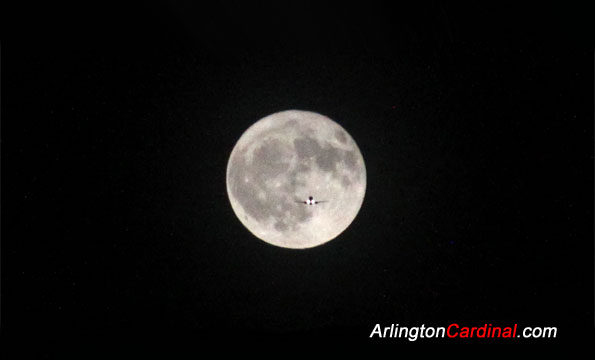 SkyWest Flight 3677 flies through the light of the Hunter’s Moon over Arlington Heights about 7:30 p.m. at an altitude of about 7,000 feet, preparing to approach O’Hare International Airport and land on Runway 9L (Aircraft: Embraer ERJ-175LR).