Elgin police and firefighter/paramedics responded about 12:30 a.m. Sunday September 9, 2018 to D Hangout, 550 South McClean Boulevard to a report that two or three women were shot, and a man was shot. Firefighter/paramedics of Engine and Ambulance Company 4 are located right across the street. One woman died as a result of the shooting. Two other women were injured by gunfire, and one man was injured by gunfire. Police upon arrival to the South McClean Boulevard address, just south of Route 20, discovered three women and one man with gunshot wounds.

The women were transported to area hospitals and the man had already transported himself to the hospital.

At approximately 5 a.m., Elgin police reported that one of the women had died from her injuries. One victim was still hospitalized at that time, and the other two victims were released from the hospital, according to Elgin police.

An investigation was immediately underway in darkness and continued until after sunrise. Police placed markers on the ground, took photographs, and used a drone to measure and document the scene. The crime scene encompassed the front driveway, the south parking lot, a large grassy area south of D Hangout, and the neighboring parking lot at 600 South McClean Boulevard. One or two vehicles were towed from the scene — possibly collected for evidence.

Firefighters washed down blood and biohazards from the scene near the front driveway about 8:30 a.m. Sunday.

Rocky Lopez, who promotes events at D Hangout was at the scene, and was shocked because he said D Hangout is a nice place, and he have never known of any type of trouble there. 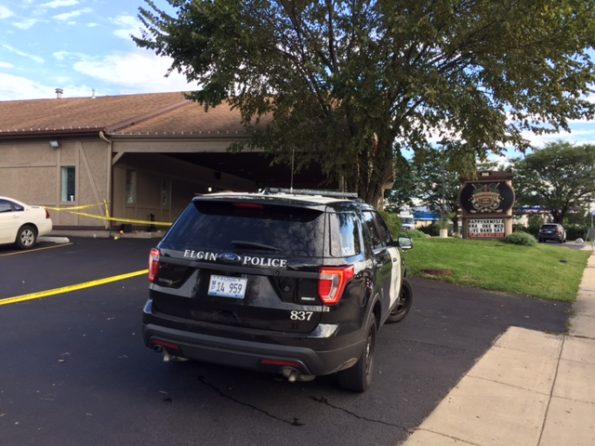