You might think of a water main break as a traffic inconvenience when a road is closed for repair; or you might be concerned about damage to your driveway, your parkway, or landscaping. Have you thought much about how a water main break might affect your drinking water safety? 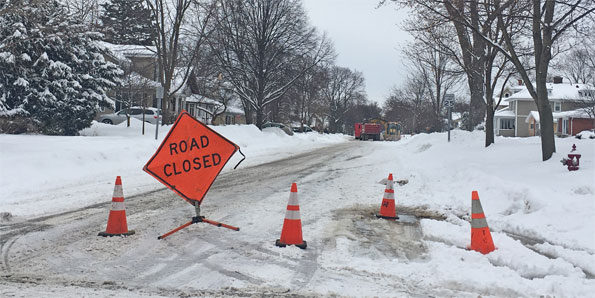 Arlington Heights has among the best water main repair crews in the country — working 24/7 in all kinds of weather conditions, including extreme cold. Does the Village of Arlington Heights management and information system to alert citizens about water main incidents match the dedication of street crews?

Think of a water main break that you have probably seen. During a water main break, water rises to the surface and sometimes pushes up driveways, parkway sod, etc. Beneath the ground, the water pressure in the main or in the supply line to your house or business drops. Water and contaminants move from higher pressure to lower pressure areas, allowing contaminants, such as sewer feces, sewer water, pesticides, fertilizers, volatile organic compounds, to enter the drinking water system.

Determining the actual water pressure in the hole of broken water main is very difficult, if not impossible. Many times water main breaks cause a drop in water pressure that activates sensors in commercial fire sprinkler systems, causing several false alarms in multiple businesses. 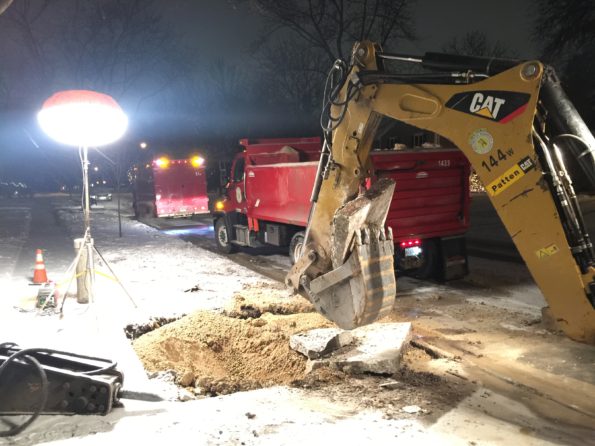 Coliform bacteria are rod-shaped Gram-negative bacteria which are commonly used as an indicator of sanitary quality of foods and water. Coliform bacteria can be found in the aquatic environment, in soil and on vegetation; they are universally present in large numbers in the feces of warm-blooded animals. Coliform are not normally causes of serious illness, but they are easy to culture, and the presence of coliform bacteria is used to indicate that other pathogenic organisms (e.g., disease causing bacteria, viruses, protozoa and multicellular parasites) of fecal origin may be present.

The Illinois EPA requires that boil orders not be lifted until …

When Should a Boil Order Be Issued?

Water pressure drops below 20 pounds per square inch (PSI) in any portion of the distribution system. A loss of pressure in the system can allow contaminants outside the water lines to enter the water system. Pressure loss can result from mechanical failure, power outage, main break, valve replacement, or high demand on an undersized water main.

In the event of pressure loss, a water system may take advantage of a “boil order exception” if there is historical data that indicates that an adequate and reliable chlorine residual was maintained in the system and the affected area, along with a written record of turbidity measurements in the affected area.. A certified laboratory either on-site or otherwise readily available is required to immediately analyze the required coliform samples. A condition of the
“boil order exception” also requires that turbidity readings following any repair must not vary from the historical levels.

A quick investigation that you could check yourself will show you that Arlington Heights seriously lags in information about water quality and water alerts compared to many other cities and villages in the United States, including our neighbors in Mount Prospect.

The Northwest Water Commission does not provide any of this type of sophisticated alert. The Village of Arlington Heights provides annual water quality information, and only provides inconsistent alerts about water main breaks.

The Northwest Water Commission web information is only a single page on the official Cook County government website showing the history of the water commission, and the structure of the commissioner form of government. A domain for northwestwater.org is parked at GoDaddy.com

This is an important message from Illinois American Water. A valve replacement has occurred in your area, resulting in a boil water order. You reside in the affected area. Customers in the affected area should bring their water to a rolling boil for 5 minutes before using water for drinking or cooking. Water is OK for bathing, washing and other common uses.

This boil water order is being issued in accordance with Illinois EPA regulations. Anytime water pressure drops below 20 pounds per square inch in any part of a community’s distribution system, a boil order must be issued as a precaution to protect customers. This boil water order is expected to be in effect for approximately 24 hours. Information is also available online at www.Illinoisamwater.com.
Thank you for your patience and understanding Show Less 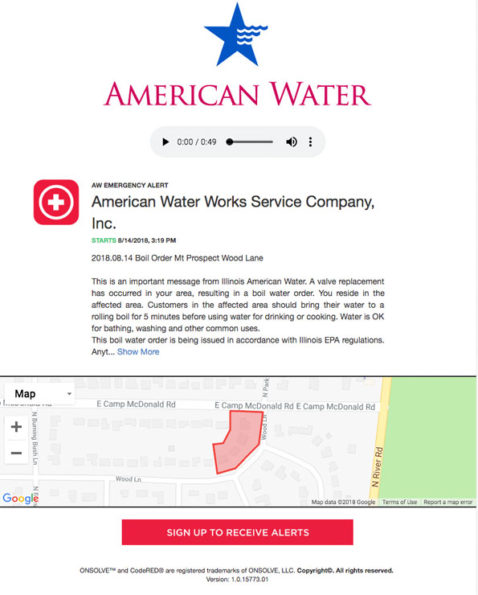 Recent Arlington Heights water main breaks have not had any Boil Order or Do Not Drink Order issued.

Why is the Village of Arlington Heights not following the Illinois EPA guidelines?

Why is the Village of Arlington Heights failing to at least alert citizens about all water main breaks, when they lack the sophisticated alerting system that is available to our neighbors in Mount Prospect? 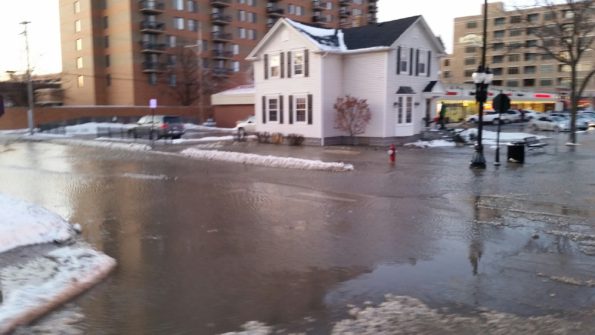