Early reports indicated that three semi-trailer truck and three smaller vehicles were involved in the crash.

A Foam Task Force from Chicago was en route to assist Berkeley Fire Department (in command). The Chicago Fire Department Task Force with some crews from O’Hare International Airport responded to the scene. A yellow O’Hare Crash Truck was on the scene putting water on a semi-trailer truck by about 2:50 p.m.

The main part of the truck fire was extinguished by the O’Hare Crash Truck, which was shut down by about 2:54 p.m. Firefighters were working with handlines and extinguishing hot spots at about 2:54 p.m.

All eastbound lanes are blocked and are expected to be blocked for at least 2-3 hours.

MABAS Division 20 EMS Plan 1 (EMS Box Alarm) on Box #?? for a truck and passenger car crash with both vehicles on fire. Box Alarm at 2:15 PM. 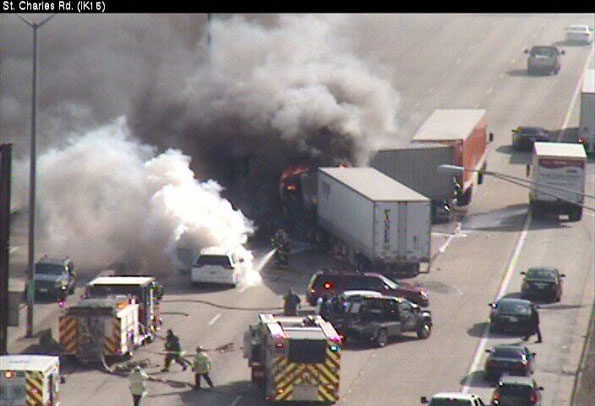 Truck Crash, Fire on I-290 near St Charles Rd Elmhurst.