Ilan Abergel, 57, of Skokie, was found about 4:25 p.m. pinned between two large pieces of granite inside a one-story commercial building –the location for Quartz Master, 1620 Jarvis Avenue, according to Elk Grove Village Police Department.

Police immediately conducted a death investigation for an apparent accidental death, and interviewed one person in a police SUV just outside of the business. An investigation is ongoing as Elk Grove Village police investigators seek witnesses and surveillance video determine the cause of the entrapment and death. However, according to Elk Grove Village Police Department, investigators believe Ilan Abergel was alone during an accident. Also, the Cook County medical examiner’s office conducted an autopsy Thursday February 28, 2018 and determined Abergel’s death to be accidental.

Ilan Abergel, a co-owner of the business, apparently was trying to move the granite stone slabs, which had been stacked vertically against each other, and he became trapped.

Firefighters returned about 6:56 p.m. for extrication and body removal, following the police investigation.

According to OSHA general information web pages, handling of granite slabs is a well-known hazard in the industry. Unloading stone slabs from containers, storing them in “slab-racking” systems, moving and handling stone slabs with equipment, and loading stone slabs onto trucks can be dangerous. Stone slabs can vary in weight from several hundred pounds to several thousand pounds — sometimes as high as 6,000 LBS.

In some cases, racking systems fail and cause stone slabs to fall.

In previous accidents, OSHA reports that employees have either placed themselves between the slabs or they have improperly positioned a wedge between slabs. Both of these instances resulted in employees being crushed when slabs shifted and leaned.

Sample violations that OSHA has cited in the granite, marble and stone industry …

Not protecting workers from crushing hazards.

Storing granite slabs in a way that created a hazard.

Failing to train employees properly in the operation of fork trucks.

Not inspecting fork trucks prior to operation.

Quartz Master produces and sells quartz, marble, granite and other stone products for kitchen countertops and other uses. 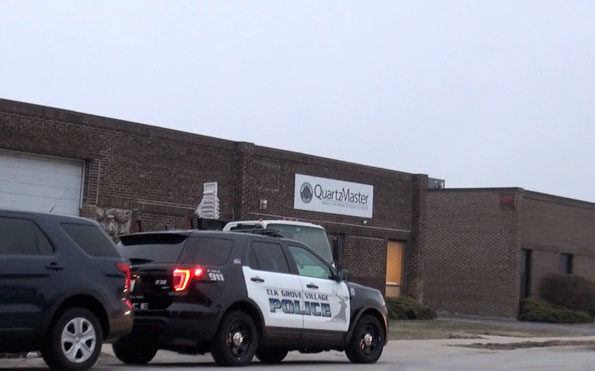 CHIEF(S): BC2    (additional chiefs not documented)

LIVE TRAFFIC MAP of neighborhood to a report of a man entrapped under a large piece of granite at Quartz Master Kitchen & Bath, 1620 Jarvis Ave Elk Grove Village, Il …