The speed limit change is also approved by the Illinois Department of Transportation and the state legislature’s Joint Commission on Administrative Rules.

The increased Speed Limit for the 24-mile long segment of Jane Addams Tollway (Interstate 90) follows a widening and redesign project that was completed in 2017. The new limit for the 24-mile segment now matches that of the remainder of I-90 between Elgin and the Wisconsin border.

A study that reviewed the volume of traffic, traffic congestion, the frequency of access points like interchanges and oases, and the prevailing speed determined it was appropriate to raise speed limits for the 24-mile segment of I-90, according to tollway spokesman Dan Rozek.

Traffic safety experts said the increased speed limit could have both beneficial and dangerous side effects. Drivers have already been frequently observed ignoring the posted 55 mph limits, authorities admitted.

The new speed limit should reduce the difference between speeds on the road between drivers staying in the speed limit and drivers driving illegally, which should make travel less dangerous. However, if a large amount of driver break the new speed limits at even higher speeds, the problem of a high difference of speeds of motorists will continue.

Increased speed tends to decrease the reaction time necessary to take evasive action to avoid a collision. People with slower reactions (longer reaction times) could be at higher risk of causing a crash.

Increased speed in crashes also result in higher forces that can cause more severe traumatic injuries, and some traffic engineers are worried the increase in speed would lead to an increase not only in the number of crashes but also in their severity. Firefighter/paramedics from Elk Grove Township, Arlington Heights, Schaumburg and Hoffman Estates would be most impacted by the change. These fire agencies cover the 24-mile segment of tollway, and are generally assigned to the area. Not only might they see an increased number of severe crashes, they may be exposed to greater risk of injuries from vehicles intruding into the crash safety zone where they are working.

Traffic safety expert Gary Hutter also explained that hydroplaning on wet surfaces becomes a bigger concern for vehicles at higher speeds. Hutter explained that higher speeds mean less reaction time and greater chances of hydroplaning … with all those factors conspiring to expose a motorist to a situation where there’s more likely to be accidents.

“During the gas crisis of the 1980s when the government reduced speed limits, there was a huge side effect of fewer accidents, and the ones there were, they were less severe,” “When the speed limit is 55, people are typically going 65. When it’s 70, they’re going 80, and when they want to pass someone it’s even faster.” 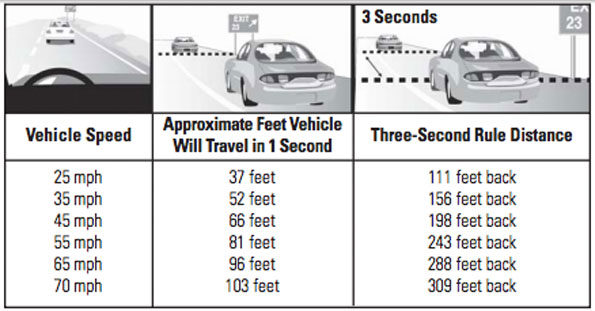 SOURCE: Illinois Rules of the Road 2018.

Drivers should consider the following when deciding vehicle speed:
• How quickly they can react physically and mentally.
• Type and condition of the roadway.
• The size of the tires — large, wide tires with good tread will stop a vehicle faster than small, narrow tires with little tread.
• The condition of the brakes — newer brakes stop a vehicle more quickly than older, worn brakes.
• The direction of the wind and how fast is it blowing — a strong tail wind can make it very difficult to stop.
• The type of vehicle — vehicle design, weight distribution