Lake County Sheriff’s deputies responded about 3:20 p.m. Saturday December 16, 2017 to a report of a person wearing a mask and armed with a gun in the area of Route 83 and Route 53 in Long Grove.

A 911 caller reported seeing a passenger inside of a Honda Accord wearing a mask, armed with a rifle. The witness described the Honda traveling northbound on Route 83 as the passenger pointed a rifle at him and other vehicles on the roadway.

Sheriff’s Deputies arrived and determined the identity of person wearing the mask, who allegedly pointed the rifle. Lake County Sheriff’s Office described the suspect as a 17 year-old boy, a resident of Mundelein. Law enforcement officers determined the rifle was a toy replica M-16 rifle.

The 17 year-old was arrested and subsequently transported to the Hulse Juvenile Detention Facility. He was petitioned to juvenile court on three counts of Aggravated Assault. 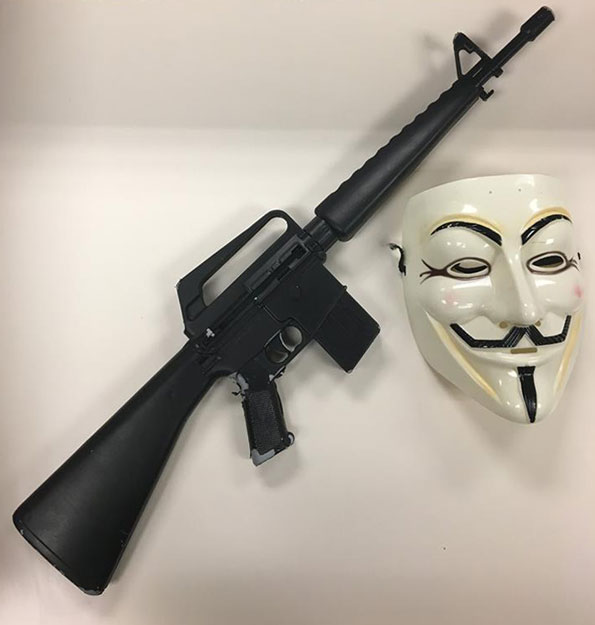 Guy Fawkes mask-wearing teen allegedly pointed this rifle while wearing this mask at motorists near Route 83 and Route 53 in Long Grove.