The USS Fitzgerald left the US naval base in Yokosuka, where it is based, earlier Friday for routine operations in the area before it crashed with the ACX Crystal Merchant ship south west of Japan.

Seven US sailors are missing and the commanding officer of a US destroyer is among three injured naval personnel after the USS Fitzgerald and the ACX Crystal merchant ship collided southwest of the coast of Japan.

The USS Fitzgerald and the ACX Crystal collided around 1:30 a.m. local time Saturday June 17, 2017 in the Pacific Ocean, about 56 nautical miles southwest from the port of Yokosuka and 12 miles off the Izu Peninsula, the Japanese coast guard said.

“The collision affected Fitzgerald’s forward starboard side above and below the water line, causing significant damage and associated flooding to two berthing spaces, a machinery space, and the radio room.”

Compared to the merchant ship, the smaller guided-missile destroyer USS Fitzgerald suffered severe damage to its starboard side.

Cmdr. Bryce Benson, the USS Fitzgerald’s commander, was evacuated by a Japanese naval helicopter, and two injured US sailors were evacuated by US military helicopters. All three US Navy personnel are in stable condition at the US Naval Hospital in Yokosuka, according to Cmdr. Ron Flanders, public affairs officer for US Naval Forces Japan.

No injuries were reported on the ACX Crystal.

Five Japanese Maritime Self Defense force ships were leading the search for the missing US sailors at the site of the collision, joined by the US guided-missile destroyer USS Dewey, according to the 7th Fleet. US and Japanese aircraft also were also conducting search and rescue operations.

The most recent port call positions for the ACX Crystal reported on vesselfinder.com were over one year ago …

According to VesselFinder.com the ACX CRYSTAL is a container ship built in 2008 and currently sailing under the flag of Philippines. ACX CRYSTAL has 213m (699ft) length overall and beam of 30m (98ft). Her gross tonnage is 29093 tons.

Carl Vinson and Ronald Reagan Carrier Strike Groups in the Sea of Japan.

#FITZ back home. Search and rescue continues for our missing shipmates. pic.twitter.com/zntHGKqzlL 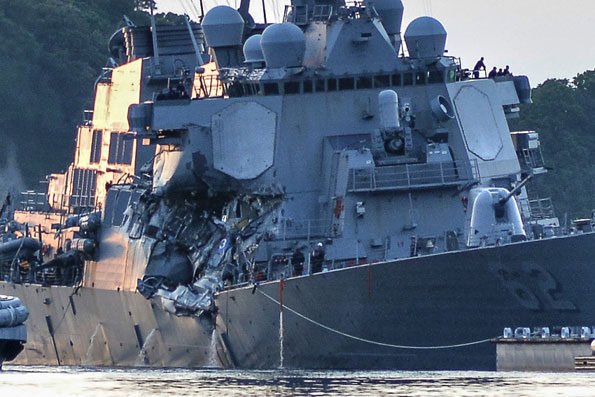