Buffalo Grove police and firefighter/paramedics responded about 9:10 p.m. Thursday June 8, 2017 to a report of a shooting victim at 1251 North McHenry Road at the Bucky’s Mobil gas station and convenience store.

Buffalo Grove police had been notified of a shooting between two vehicles driven by men on Deerfield Parkway near Brandywyn Lane at 9:06 p.m. Both crossover SUVs or compact SUVs headed westbound on McHenry Road and stopped at the nearby Mobil gas station at 1251 North McHenry Road by about 9:10 p.m. after the shooting. The Mobil gas station is less than one mile from the shooting scene.

Buffalo Grove police officers responding to the Bucky’s Mobil gas station discovered that an 18-year-old man had a gunshot wound to the abdomen near his hip. Police also received a report that a 31-year-old Chicago Department of Aviation officer, who was also injured, had been struck a short time earlier by a Honda Civic driven by the 18-year-old, police said. Each vehicle had a passenger, and neither passenger was injured.

Buffalo Grove police say the off-duty Chicago Department of Aviation officer and the 18-year-old Deerfield man were involved in a shooting and aggravated assault Thursday night in Buffalo Grove.

Both men were transported to local hospitals. The 18-year-old was transported to Level I Trauma Center Advocate Condell Medical Center in Libertyville, where he was listed in stable condition. The 18-year-old was expected to be released later on Friday. The off-duty Chicago Department of Aviation officer was transported to Northwest Community Hospital in Arlington Heights, where he was treated and released. He was apparently injured by the aggravated assault with a vehicle, but this was not confirmed by police. The aviation officer was not believed to have been injured by a gunshot.

Police recovered two compressed air rifles and an air pistol from the 18-year-old’s vehicle, and a handgun from the off-duty officer.

Buffalo Grove police said no members of the community are at risk.

Investigation into the circumstances that led to the shooting are under investigation. Police are withholding the names of those involved until all witnesses are interviewed and the Chicago Department of Aviation has been notified.

Police had not filed charges as of Friday afternoon. 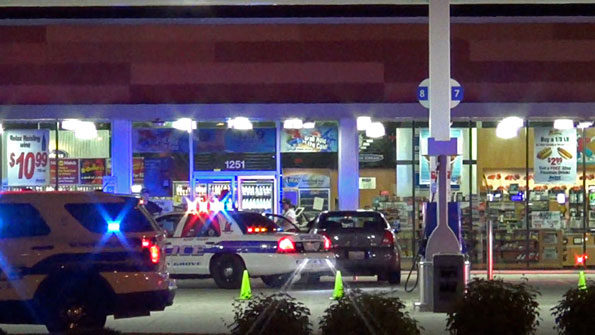