Pre-arrival video of multiple vehicle fires in a parking garage in Chicago at Adams and Wabash, showing first due fire companies arriving from Chicago Fire Department.

Chicago police and firefighters and paramedics responded about 12:38 PM Saturday June 10, 2017 to a report of a vehicle fire in a high-rise parking garage building at 17 East Adams Street Chicago, Il. The first fire crew on arrival reported the fire is at about the 5th Floor of the parking garage.

The Rehab Unit was meeting the EMS Field Chief 4-5-1 at State and Adams at 1:05 p.m. The Rehab Unit is used to monitor firefighters’ vital signs and provide treatment, especially in hot weather conditions.

Staging for fire equipment is at State Street and Madison Street.

Battalion Chief 1 requests a 2-11 Alarm fire department response at 1:09 p.m. According to Chicago Fire Department media, the 2-11 was called for extra manpower during overhaul. Weather conditions are a factor for this firefighting operation and firefighter safety. Weather observations at O’Hare International Airport at 12:51 p.m. was 86°F with a Dew Point of 86°F Humidity 31%. Heat Index 84°F.

Winds were southwest at 18 MPH and gusting to 33 MPH.

Multiple vehicle fires were mostly extinguished by 1:20 p.m. Saturday. At least 12 vehicles were believed to have been damaged or destroyed on the 7th floor of the parking garage. Six vehicles were fully-involved with flames, according to Chicago Fire Department.

CHIEF(S): BC1
FORWARD FIRE COMMAND: BC2
FIRE ATTACK: BC3 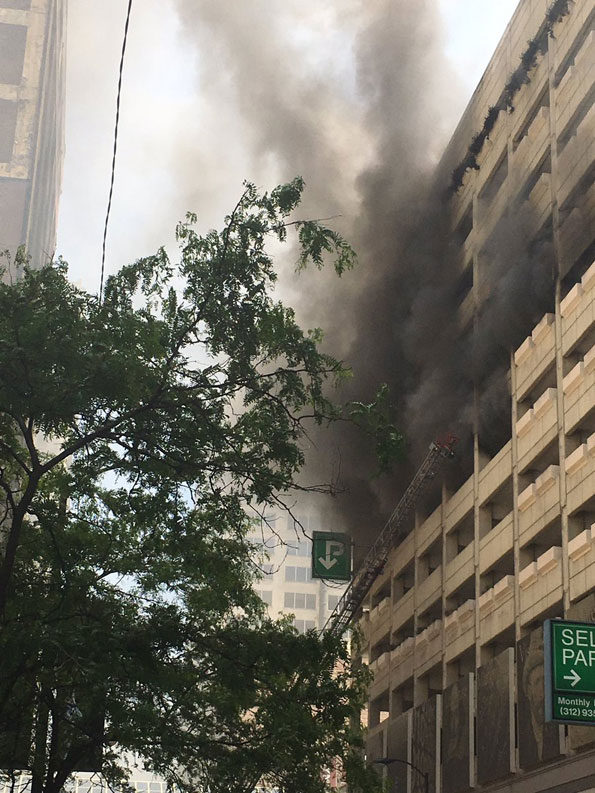 LIVE TRAFFIC MAP of neighborhood to a report of a vehicle fire in a high-rise parking garage building at 17 East Adams Street Chicago, Il …

Another pic of the #fire at State & Adams #chicago pic.twitter.com/CR2GE32JWa

Fire inside a garage at Adams and Wabash, Chicago pic.twitter.com/THFLyP0095