Arlington Heights and the northwest suburbs were hit by a narrow but powerful line of thunderstorms about 11:30 p.m. Wednesday, May 17, 2017. According to the National Weather Service, DuPage Airport reported the highest wind gust of 66 MPH at 11:17 p.m. A trained spotter reported a 60 MPH gust at 11:28 p.m.

High winds brought down several trees and a utility pole at Kensington Road and Forrest Avenue and on Park Street east of Arlington Heights Road.

At least 1500 ComEd customers were without power in the area from Euclid and Dryden to Waterman and Kensington and nearby — right after the storm hit. Recreation Park was without power.

About 352 ComEd customers remained without power from an area just southwest of Prospect High School to the area of Kensington Road and Gibbons Avenue near the Forrest Avenue downed utility pole. Restoration time was estimated at 3:00-3:15 p.m.

About 222 ComEd customers remained without power near Arlington Heights Road and Park Street. Restoration time was estimated at 3:00 p.m.

About 96 ComEd customers were estimated without power near Dunton Avenue and Rockwell Street near the location where the tree was on fire. Restoration time was estimated at 3:00 p.m.

About 72 ComEd customers remained without power south of Central Road and east of Arlington Heights Road. Restoration time was estimated at 3:00 p.m.

About 604 customers remained without power near Ridge Avenue and Central Road near Northwest Community Hospital. Restoration time was estimated at 3:00 p.m. 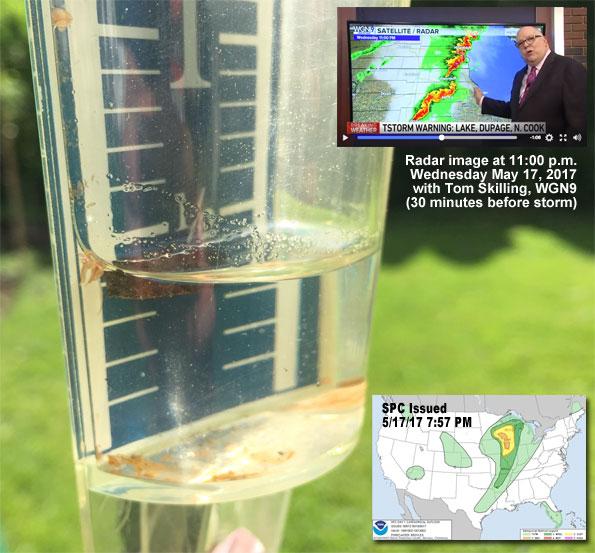 Almost one-half inch of rain fell in less than 20 minutes. The total accumulation was just shy of one-half inch, and no more rain or storms were expected overnight.

There were several cloud-to-ground lightning lightning strikes in a short period of time.

Several of the downed trees were downed from south to north (Kensington and Forrest). While some trees nearby were downed (Prindle north of Northwest Highway) were downed west to east.

A tall pine tree was snapped in half about 25 feet above ground at the southwest corner of Kensington Road and Forrest Avenue.

A large tree was down south to north on Park Street at Arlington Heights Road at the southeast corner of the intersection.

A tree down in the block of 700 South Dunton Avenue started on fire.

A tree was down (west to east) against a house on Prindle Avenue.

A large branch was down across the road (north to south) across Park Street just west of Roosevelt Avenue.

A large branch was down again after Arlington Heights forestry crews had just cleared a large branch on Belmont Avenue south of Miner Street.

Comcast and WOW Internet & Cable were out with emergency generators supporting digital telephone service by about 12:30 a.m. Thursday May 18, 2017.