The single-engine plane belonged to Rob Sherman, according to Federal Aviation Administration the aircraft record for the aircraft N4218 crashed at the scene. The pilot’s name has not yet been released. The aircraft is listed as not fractionally owned.

National Transportation Safety Board investigators were planning to transport the plane wreckage to a secure facility before forecasted heavy snow arrived Saturday evening.

Sherman was offering his “builder facilities, tools, advice and help in building” customer airplanes for “a modest fee.” The total cost for a customer’s new Zenith Kit Airplane from Rob Sherman Airplanes was estimated at about $70,000, depending on how much of the work building the customer would do on their own.

In the political arena, Sherman unsuccessfully ran as a Green Party candidate for Congress in the Fifth District in the Fall 2016 election. He was planning to run again in 2018 for the 12th District seat downstate.

Sherman gained notoriety in the 1980s while bringing lawsuits to suburbs that displayed religious symbols such as the Christian cross on local government property, water towers, city logos, signs, or vehicles.

Celebration of the opening of the Nativity Scene at North School Park in Arlington Heights in December 2012. Rob Sherman speaks at elapsed time 10:44 a.m.

In December 2012 Rob Sherman was present for the opening of a Nativity Scene at North School Park in Arlington Heights and said celebrated the proper negotiations with the government for the religious and secular agreement leading to the first setup of the free speech area and display at North School Park. Sherman complimented the proper recognition of the First Amendment, and the example set in Arlington Heights that Christians and atheists can be friends despite “theological differences.” Sherman complimented the display with its proper notice by the Arlington Heights Park District and the separation of the religious display from the secular displays at the park. Initially the Nativity Scene was not permitted to be displayed at North School park out of concerns of lawsuit from atheist groups. The Arlington Heights Park District stated the nativity display was inconsistent with their practice of using only their own decorations — a toy-themed display. Also a permit was not requested.

On behalf of Jim Finnegan, chairman of the Illinois Nativity Scene Committee and former Arlington Heights resident who requested the Nativity Scene, the Thomas More Society (described as a national public interest law firm dedicated to restoring respect in law for life, family, and religious liberty) submitted a formal letter of complaint to the Arlington Heights Park District, saying their right to display a Nativity Scene is protected under the First Amendment.

The Arlington Heights Park District consulted attorneys, and the permit for the nativity scene was immediately approved. 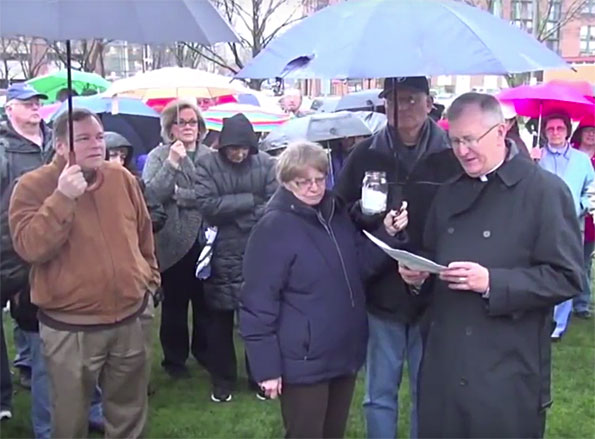