Arlington Heights police and firefighter/paramedics responded about 1:31 PM Monday to a report that a male subject was trying to stab a woman at Stonebridge Apartments, 700 West Rand Road Arlington Heights, IL. Police and firefighter/paramedics received a report that a man fled the scene after trying to stab a woman, and ran behind “the barbecue place” on Rand Road.

Police found the apparent offender by 1:33 p.m. and were investigating.

Police and firefighter/paramedics also received a report that the male subject attempted to stab a woman, took something from her and ran away.

No word yet if the man was arrested. He was described as a male/white subject about 25-years-old wearing a black hoodie and sweatpants.

No injuries were reported and paramedics left the scene without transporting any people.

LIVE TRAFFIC MAP of neighborhood where there was a report that a male subject was trying to stab a woman at Stonebridge Apartments, 700 West Rand Road Arlington Heights, IL … 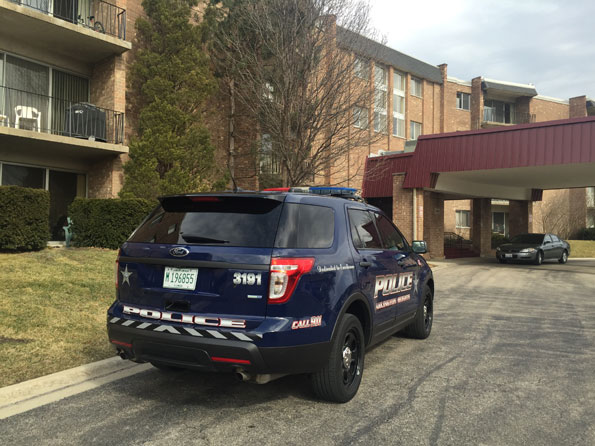 Police at the scene of an incident involving a reported “man with a knife attempting to stab a woman” at Stonebridge Apartment, 700 West Rand Road in Arlington Heights.

An attempted armed robbery with a knife was reported to Arlington Heights police on Saturday in the 1400 block of West Rand Road about 0.5 mile west of today’s knife-related incident. Police did not specify whether the crime occurred near Crave Bar and Joynt on the north side of Rand Road or in a nearby neighborhood or in the apartment complex south of Rand Road. Police did not publically release information about Saturday’s attempted armed robbery until Monday, February 29, 2015 at 12:39 p.m. The suspect in Saturday’s incident was reported to be a male/Hispanic about 18-20 years-old, 5’6″ with a slender build, and wearing a dark-colored hooded sweatshirt and long pants. As of today, police did not announce that the Saturday robber, armed with a knife, was in custody.