WITNESS VIDEO: A fire broke out on the 50th floor of the John Hancock Center skyscraper in Chicago, Saturday, injuring at least on person.

A fire in a 50th floor residential unit Saturday, November 22, 2015 has been ruled accidental and caused by a candle, according to Chicago Fire Department Office of Fire Investigation.

Fire Engine 98’s crew — first on the scene –reported nothing showing upon their arrival. Shortly afterward flames were seen coming out windows about halfway up the John Hancock Center.

A firefighting investigative team (interior crew) headed up to the 50th floor to determine the location of the fire by about 2:41 p.m.

An injured police officer was rescued and transferred immediately to the lobby. He suffered smoke inhalation.

The fire was declared extinguished by about 3:10 p.m., as firefighters on truck companies were gathering with electric fans to provide ventilation and the clearing of smoke.

The EMS Plan 1 was secured at 4:25 p.m. with a total of five patients transported to hospital(s) with minor injuries.

The fire occurred as The Magnificent Mile Lights Festival was underway, and just hours before the Tree-Lighting Parade along North Michigan Avenue from Oak Street to Wacker Drive.

LIVE TRAFFIC MAP of neighborhood to a report of a fire in a high-rise at the John Hancock Center, 175 East Delaware Place Chicago, IL …

Posted by Emergencies Behind the Scenes on Saturday, November 21, 2015 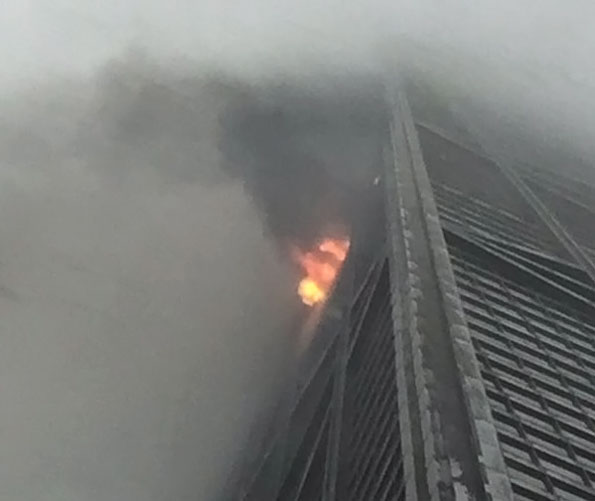