VIDEO: Accident investigation by Schaumburg Police Department and the Major Case Assistance Team on Springinsguth Road at the south intersection with Hartmann Drive about 11:30 p.m.

One vehicle had severe front-end damage and a Mitsubishi sedan had severe damage at the driver’s side door.

News media Tuesday morning were awaiting confirmation about details of the crash, and whether there was a third crash victim. 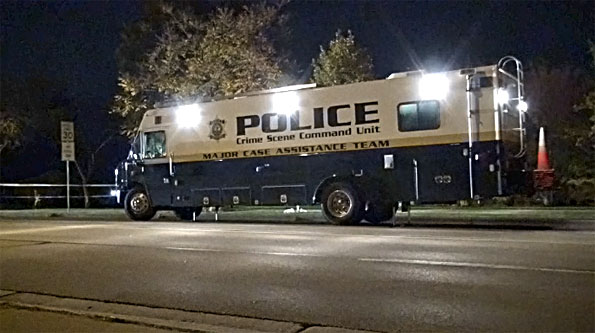 The Major Case Assistance Team was called to the scene for an extended crash investigation. Investigators were working past midnight with Springinsguth Road closed in both directions near Hartmann Drive.

Both crashed vehicles were stopped about 90 feet south of the south intersection of Hartmann Drive and Springinsguth Road. The Mitsubishi was on the east side parkway, off road. The other vehicle was facing north in the southbound lanes of Springinsguth Road.