VIDEO: Firefighters in defensive mode immediately after arriving at a house fire on South Dunton Avenue with the second floor fully-involved.

Firefighter/paramedics were dispatched and immediately went to work on defensive operation. The quick action of firefighters on the south side of the burning house prevented the exposed house to the south from catching on fire. The fire was too dangerous for firefighters to immediately enter the house, and part of a floor in the rear of the house collapse as firefighters arrived.

Winds were strong from the south at about 15 mph with gusts to 20 mph — helping fuel the fire. A thick, strong odor of smoke was detectable in neighborhoods north of the fire scene as far north as Thomas Street.

Firefighters found at least one victim unresponsive within about 15 minutes of arrival, and removed the victim out of a window on the north side of the house. Two more victims were found unresponsive inside the house. All three victims died, and all three victims are believed to be adults. Firefighters were still searching the house Wednesday for any possible additional victims in collapsed areas of the house. The Illinois State Fire Marshal was called to the scene, and arrived just before 5:00 a.m.

No firefighters were reported injured in firefighting operations before 7:00 a.m. 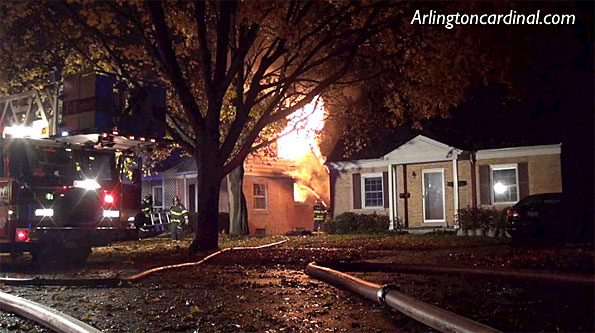