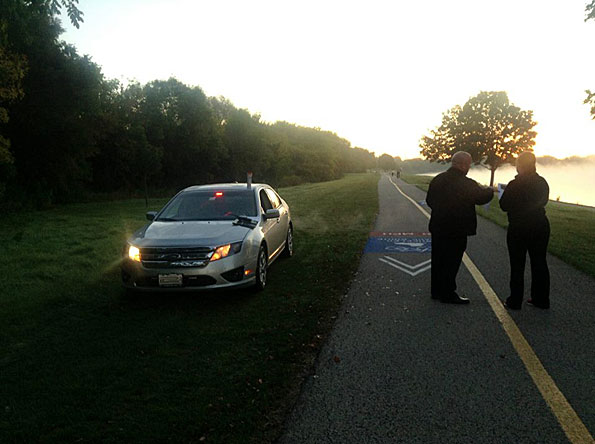 Police on the path at Lake Arlington on the north side of the lake near the location where a woman was attacked and dragged to a wooded area before she escaped.

Arlington Heights police were out Friday, Saturday, and Sunday, and early Monday to alert joggers, bikers, and walkers about an attack of a female jogger on the open trail just north of the lake. Police handed out fliers and placed fliers on windshields of vehicles parked at the Lake Arlington parking lot. Uniformed officers were out over the weekend alert patrons of the park. Monday morning detectives were located in three positions around the lake.

One man wondered about the new safety procedures implemented at the Lake Arlington trail, which has all people walking in the same direction. He thinks it makes it easier for an offender to sneak up behind people, since they are all facing the same direction.

The woman was attacked just before the break of dawn. Civil twilight or the dawn began at 6:17 a.m. which is when the first noticeable light appears in the sky over Lake Arlington. On Monday the break of dawn was about four minutes later at 6:21 a.m. Sunrise on Thursday, September 26, 2013 was 6:45 a.m. — usually about 30 minutes after the break of dawn. During twilight there are areas of the woods that remain much darker than open areas. Most people stayed of the short segment of trail that is located in the woods on the north side. It is much easier for an offender to hide in those dark area — especially during twilight when victim’s eyes might not adjust rapidly from a light sky to a dark wooded area. A person wearing dark clothing can hide very effectively. See the photo album on The Cardinal Crime and Forensics Facebook page for views of various levels of light and darkness after dawn and after sunrise.

On September 26, 2013, at approximately 6:00 a.m., an adult female was jogging at Lake Arlington Park when a male wearing dark clothing grabbed her from behind. The offender dragged her off the jogging path and forced her to the ground. After a brief struggle, the offender ran away.

The Arlington Heights Police Department is seeking witnesses and is requesting assistance in identifying the offender.

The offender is described as a male, approximately 6 feet tall, with a thin build, and wearing dark clothing.

The female victim was not injured, and could not assist with a sketch of the offender at this time. The attack occurred on the north side of Lake Arlington, which is where the wooded area is located.