VIDEO: Firefighting operations near the intersection of Carrington Drive and Remington Drive, Crystal Lake (Photos from the scene …).

Crystal Lake and Nunda Township firefighters 3:29 PM Wednesday to a report of a house fire at 3217 Carrington Drive Crystal Lake, IL. Firefighters arrived to find one home fully-involved with flames and embers landing on the roofs of at least three homes across the street to the north. A fourth home, on East Terra Cotta Avenue, was not visible from the main fire scene, but also received minor damage from embers landing on the home.

With the first house at a total loss, firefighters concentrated efforts on the homes to the north of the initial house, which was totally destroyed with only a chimney and one partial side of a brick wall still standing. A gas line continued to burn with an associated hissing or rushing sound from the initial home on the northeast side of the home.

Neighbors were quick to assist by attempting to soak the roofs of the affected homes and help evacuate their neighbors. One man was burned slightly when he was hit by an ember. Neighbors also helped the resident who lives at 3217 East Terra Cotta. A Woodstock fire engine and brush trucks from Richmond and Wonder Lake were positioned to protect the house on East Terra Cotta Avenue. 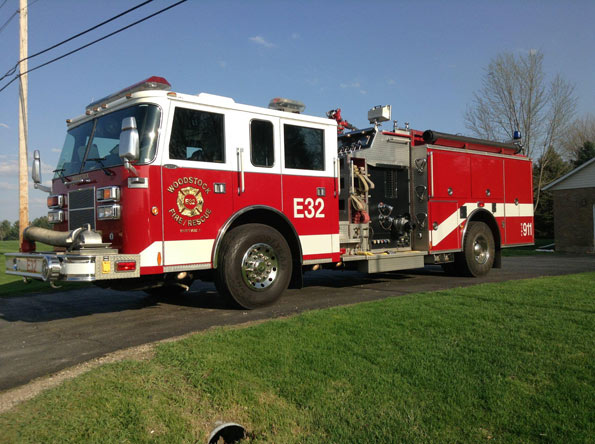 3222 Carrington was left uninhabitable after heavy fire damaged the cedar shake roof, extended into the attic, and resulted in open holes in the roof. The interior of the house suffered smoke and water damage.

3217 E. Terra Cotta Avenue, the next roadway north of the neighborhood received minor damage to the rear deck and siding. Landscaping damage also occurred with burning plants and other outdoor structures between the backyards of Terra Cotta Avenue and Carrington Drive.

Landscaping spot fires also occurred between the backyards of the initial fire residence at 3217 Carrington Avenue and the house directly south of the fire.

No initial heat damage was discovered at the house directly to the south of the initial house burned to the ground.

Three firefighters were transported to Centegra Hospital in McHenry with heat-related illnesses.

Map of area of on house fire spreading to three others …