Take a good look at the Google satellite view of our 9-1-1 center, Northwest Central Dispatch at 1975 East Davis Street. Does anything look a little vulnerable? At the end of one of the most desolate roadways in Arlington Heights sits the 9-1-1 center for eleven police agencies* — Arlington Heights, Buffalo Grove, Elk Grove Village, Hoffman Estates, Inverness, Mount Prospect, Palatine, Prospect Heights, Rolling Meadows, Schaumburg and Streamwood — serving a total of almost 500,000 residents. The number of workers and employees and people traveling through the area served by the 9-1-1 center brings the population to an estimated 800,000 to one million people during the day.

The two train derailments in Glenview/Northbrook involved a pileup of train cars on or near Shermer Road just south of Willow Road. Fortunately none of the railroad cars carried hazardous materials. Unfortunately, in the second derailment on July 4, 2012, two people were buried alive under piles of coal, railroad coal cars, and collapsed bridge debris.

(1) Could a train derailment accident at the railroad bridge at Northwest Highway and Davis Street knock out the 9-1-1 center?

Both situations are possible. Conclusion? The Northwest Central Dispatch System 9-1-1 center should not be located where it is located. 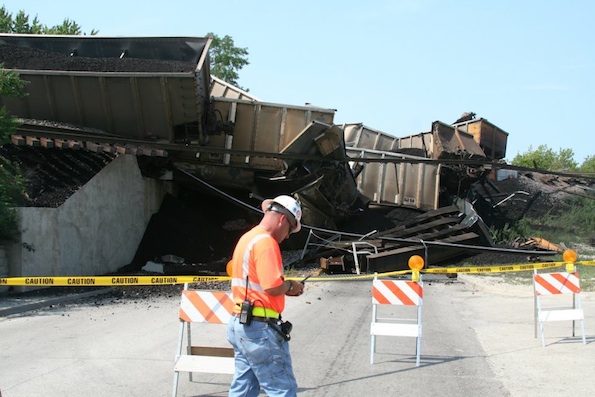 Union Pacific railroad worker sizes up bridge collapse and train derailment at the Shermer Road railroad bridge between Willow Road and Holste Road at the border of Glenview and Northbrook on July 4, 2012. See over 160 more photos

VIDEO: Train derailment at bridge over Shermer Road on July 4, 2012 (same bridge as below).

VIDEO: Train derailment at bridge over Shermer Road on November 1, 2009 (same bridge as above). 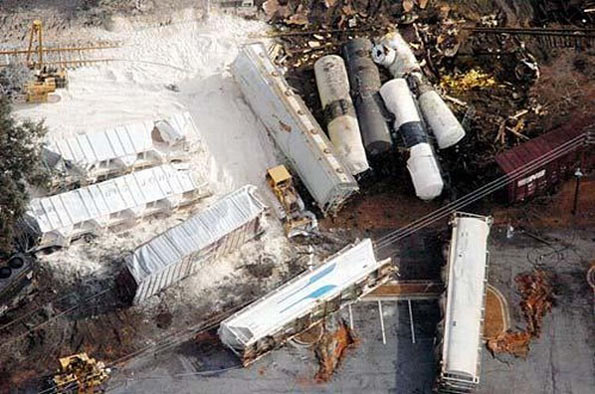 Exploding freight cars full of ethanol made for a dramatic early morning scene in Ohio’s capital on July 11, 2012. About 100 residents who live within a 1-mile radius of the explosion were evacuated by firefighters and police.

RAW VIDEO from Associated Press of the freight train derailment and explosion in Columbus, Ohio resulted in authorities evacuating a mile-wide area of the city as they tried to contain the blaze and determine what was burning.

On June 19, 2009 after a major downpour of rain in Rockford, Illinois, 14 of the 114 ethanol tankers of a Canadian National freight train derailed and exploded into flames. One person at a rail crossing died, several others were burned.

If railroad cars in a train derailment near Davis Street were transporting hazardous material or flammable contents, the 9-1-1 center would be at great risk — requiring evacuation. The 9-1-1 center is also close enough (less than half a football field, 43 yards) that it could be consumed by fire and total destruction.

Six of the nation’s seven Class I railroads have major terminals in Chicago. Nearly 500 freight trains per day operate in the Chicago region. Railroads are required by law to accept hazmat shipments, and the Chicago Metropolitan Agency for Planning predicts an increase in freight in our region. Railroads carried about 631 million tons of freight in 2007. Assuming future economic growth, rail companies foresee the length of trains to increase from 125 cars to 175 cars. The Center for American Progress reports that Rail security regulations are minimal, because federal rules preempt state and local requirements; chemical railcars passing through communities are largely exempt from local control. Many times first responders don’t know what is on the railroad cars until they are called to respond to an accident, and determining the contents can be a difficult task if placards are buried, records are burning, or train personnel are not responsive.

Fortunately, the Union Pacific railroad line through Arlington Heights does not carry a heavy amount of freight railcars and there are probably less hazardous rail cars on the northwest line compared to other lines in Chicagoland, but there is nothing that prevents dangerous railcars from passing through.

TERROR ATTACK
The risk of a terror attack is especially worrisome given the vulnerability of railcars and trains. A RAND Corp. database of worldwide terrorist incidents recorded over 250 attacks against rail targets from 1995 to 2005. On May 13, 2011 a semi-dump truck crashed into a passenger train at Mount Prospect Road — a few miles east of Davis Street and the 9-1-1 center. There were initial concerns that the crash was intentional, but it was later ruled that the crash was accidental — a simple disobeying of the railroad signals and gates.

The use of explosive charges detonated at the railroad bridge directly across from the 9-1-1 center could also have a devastating effect by causing a train derailment. A train derailment of a long train could also cut off the north side of Arlington Heights emergency responders from the south side or vice versa — forcing crossover at Route 53 or at grade crossings in Mount Prospect.

The desolate roadway of Davis Street is also a security risk. There is much less chance for suspicious behavior to be detected. The railroad tracks are barren most of the time with no good view of the area from residents that live on Northwest Highway. Melas Park to the south is barren at night, and at many times of the day. The park district/public works facility to the east is also barren much of the time. On Saturday morning, May 11, 2013 about 6:30 a.m. two semi-trailer trucks were parked directly to the northeast of the Northwest Central Dispatch 9-1-1 center, for which there is enough security concern that it is surrounded by a tall security fence and an electric gate. One of the trucks was directly adjacent to the northeast section of the 9-1-1 center. Absolutely no trucks should be allowed to park next to the 9-1-1 center. What if that semi-trailer truck were packed with ammonium nitrate explosives instead of mulch? 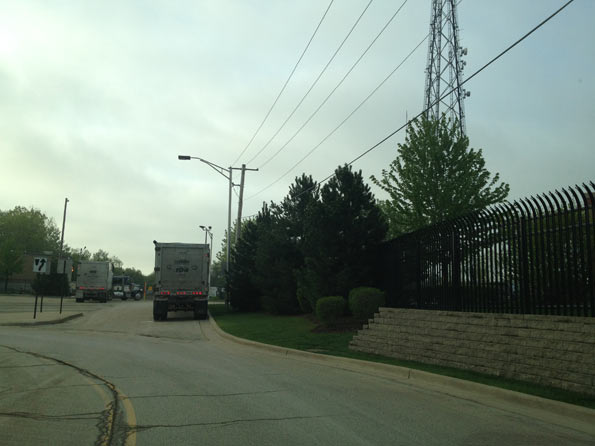 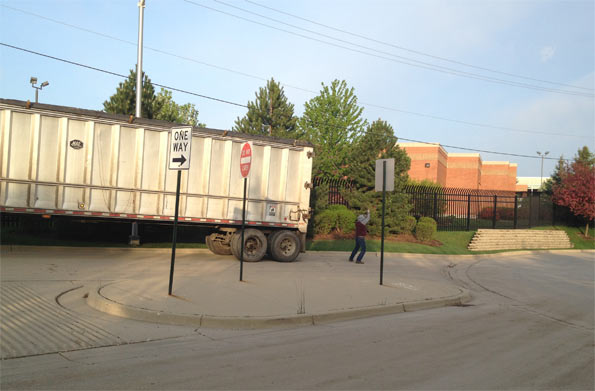 In the post-9/11 era, the 9-1-1 Center should be combined in a heavily-secured police headquarters, where the building is under constant watch. This is especially important because Northwest Central Dispatch now covers such a large population. Initially, the 9-1-1 center was in the old municipal building. Now that the Northwest Central Dispatch 9-1-1 center serves a much greater population, the stakes are much higher. The vulnerability of the 9-1-1 center and its high capacity to serve a large population could attract terrorists.

Terrorists considering an attack could choose to attack an area that had a vulnerable 9-1-1 center — attacking the 9-1-1 center first and then attacking the primary target for mass destruction, such as Woodfield Mall or multiple schools or a festival, such as Schaumburg Septemberfest or Frontier Days in Arlington Heights. Knocking out the 9-1-1 center first could cause a much greater loss of life and property destruction because of delayed response of police and firefighter/paramedics.

Immediate action should be taken to prohibit trucks from parking next to the Northwest Central Dispatch System 9-1-1 center for security purposes. Security cameras should be fixed on the location, so that police could respond to issue citations to truck drivers that ignore the no parking restriction, and ascertain the reason for the truck being in the area. Also security cameras should be fixed on the railroad tracks and the railroad bridge near the 9-1-1 center for security reasons. If cameras fixed on the bridge in the area are hidden, perhaps they should be exposed in order to discourage terrorists or even vandals from tampering with the railroad bridge. While the Village of Arlington Heights has a visible camera aimed at the fountain at North School Park, there is no visible camera aimed at the railroad bridge near the intersection of Northwest Highway and Davis Street.

In planning for a future police facility for Arlington Heights, administrators should seek funding from the Homeland Security Grant Program or other possible grant programs to move the 9-1-1 center away from the railroad tracks and combine it with the construction of a new Arlington Heights Police Department Headquarters. According to FEMA, an Urban Areas Security Initiative (UASI) had $490,376,000 funding available in 2012 that addresses “unique planning, organization, equipment, training, and exercise needs of high-threat, high-density urban areas, and assists them in building an enhanced and sustainable capacity to prevent, protect against, mitigate, respond to, and recover from acts of terrorism.”

It’s time the 9-1-1 center be moved away from a property location that is only worthy of storing replaceable property and junk.