“I am humbled by Sen. McCain’s endorsement. I admire the senator’s leadership skills. These are the same skills that I hope to bring to Arlington Hts. as village president to work tirelessly on behalf of our residents’ best interests.”

Most likely Ron Drake called Sen. McCain’s office and asked for the endorsement. It would be a little odd if Drake then turned around and said he was humbled by an endorsement he just requested as a political favor.

#10 The endorsement puts the spotlight on Drake as an outsider. Both opponents were quick to capitalize on that point with Tom Hayes saying, “What’s important is what’s happening here in Arlington Heights, and not what has happened or is currently happening in the state of Arizona” ; and Mark Hellner saying, “I don’t think people in Arlington Heights are going to pay much attention to an Arizona Senator telling them how to vote.” Voters are more concerned about what a candidate can do for Arlington Heights now, not what a candidate’s resume looks like as mayor from a completely different city and during very different economic times.

#09 The endorsement is another example of Drake’s tendency to go for the spectacular overkill. During his term as mayor he got caught up in court when an administrative matter went to referendum. The court ruled that an issue about approval of a Mini-Storage business had no place being decided by public referendum.

#08 The endorsement smacks of immaturity — like calling in your big brother because you can’t handle your battles yourself.

#07 Many voters reacted to the remarkable irrelevance of the choice. Why would Sen. John McCain have any interest in the race for Arlington Heights Village President, except to offer a superficial glossy endorsement? Did McCain analyze Hayes and Hellner? That’s highly doubtful. And if he did, shouldn’t he be more preoccupied with immigration and border issues in Arizona, or staying focused on the Benghazi debacle and coverup, and the U.S. debt ceiling crisis? Many Arlington Heights voters aren’t going to be receptive to Sen. McCain’s two-minute consideration and press release about the Arlington Heights Village President race.

#06 The Libertarian voters and Libertarian-inclined Republicans aren’t putting much stock in Sen. John McCain these days after he called Sen. Rand Paul’s 13-hour filibuster “unserious” … and referred to Sen. Rand Paul as “confused.” McCain also apologized recently to his Senate colleagues Rand Paul (R-KY) and Ted Cruz (R-TX) for calling them “wacko birds” and called his statement inappropriate. Libertarians and some conservatives believe McCain misses the point of Libertarian-leaning Sen. Rand Paul, who recently spoke at the Northwest Suburban Republican Lincoln Day Dinner at The Cotillion in Palatine on the eve of the filibuster in Washington D.C.

#05 McCain is the “R” word (Republican), and getting an endorsement from McCain spotlights the Republican association with Drake’s campaign. It’s likely some voters didn’t even know Drake is Republican with all of the “Change” talk that Drake’s campaign uses — similar to President Barack Obama’s campaign. Although Ron Drake has been open about being a Republican, a stronger Arizona Tea Party association might cause him to lose some Democratic voters, who would move over to Hellner.

#04 By precinct map analysis, Arlington Heights is mostly Republican. Local politics have usually been non-partisan in Arlington Heights. While the mention of McCain accentuates the Republican-Democratic divide, the association might really accentuate the Republican-Republican divide. In spite of his war hero status as a tortured prisoner of war, there are probably more Republicans freshly disappointed with his lack of effectiveness lately. Combine the lack of effectiveness with his getting involved in local politics that is below his pay grade, and you have a vicious cycle — less respect for McCain and hence less respect for Drake. RINO = Republican In Name Only.

#03 Not exactly a winner. Many perceive Sen. John McCain as washed up. He lost during the Republican presidential nomination in 2000 to George W. Bush. Then after securing the 2008 nomination, he lost to Democratic candidate Barack Obama.

#01 Sen. John McCain’s choice of Sarah Palin as running mate was instantly detested by Progressives, and divisive for much of the rest of the country. He still has a strong recall association with Sarah Palin among Progressives. That could certainly be a turnoff for Progressives that might have been considering a vote for Drake. 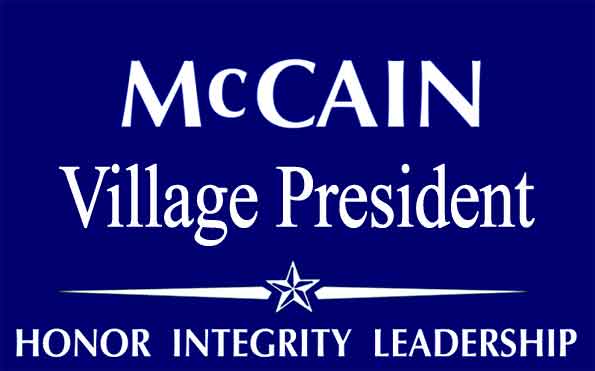 A little political satire: Could Sen. John McCain (R-AZ) be considering local politics in Arlington Heights — this could be his chance to finally be President.