Following a police escort and Warriors’ Watch Riders escort, 25 Navy Recruits (040) from Naval Station Great Lakes enjoyed a day with great meals, telephone banks for calling family and friends, Internet access, video games and relaxation. The event was organized by Bob and Linda Stack, parents of Marine Lance Cpl. James Stack was killed in Afghanistan in November 2010, leaving behind his 19-year-old widow, Katie, and a 1-year-old daughter. The Stack’s daughter Megan and about 100 community members were there in support of the event. Supporters lined the main hallway on the east side of Christian Liberty Academy from the Main Office to the school cafeteria on the opposite side of the building — cheering, thanking the recruits and wishing them a Merry Christmas. The recruits had been isolated from television and the Internet since early November and are set to graduate in January.

The polite group of men were grateful for the day. They enjoyed a breakfast, main lunch, and a Chicago-style dinner. Lunch included ribs, parmesian-crusted chicken breasts, potatoes, baked beans, corn on the cob, vegetables and Red Bull, followed by apple pie a la mode with cinnamon and toffee — all cooked first class by Chef Tim Almy, his family and the Culinary Class from Christian Liberty Academy. The large commercial kitchen is now used by the talented chef, to cook hot meals for students and staff at Christian Liberty Academy. On Christmas, the immaculate kitchen was an impressive site of food preparation worthy of an episode on a cable television or network television food program. The main lunch was preceded by a Continental Breakfast, and was followed by a Chicago-style dinner complete with Chicago-style Vienna hot dogs, pizza, chopped salad, and brownies with ice cream.

In between meals, the recruits (from all over the United States) spoke with community members, and enjoyed group photos, private telephone access, Internet access, Skype access, video games, foosball, Chicago Cubs baggo games, and basketball court access. First access on the Internet was unanimously pointed to Facebook, where computer workstations were set up in a second floor science room, which was dominated by former Arlington High School teacher John Harth during the Arlington High School Cardinals era at the school building.

The Christian Liberty Academy library was converted to a game arcade for a day with a main projection screen and multiple monitors attached to XBox consoles. 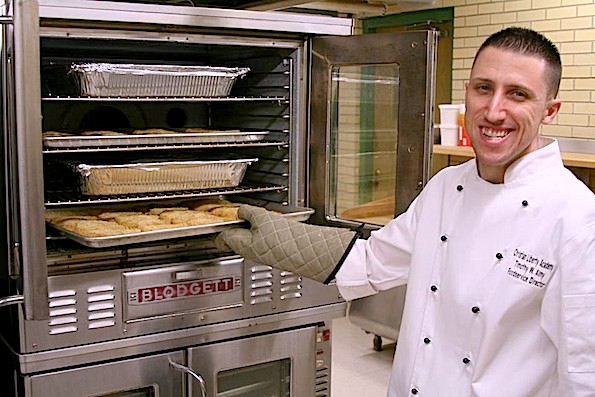 Commander, Navy Installations Command (CNIC) is the authority responsible for shore installation management under the United States Navy; it is responsible to the Chief of Naval Operations. CNIC was established on October 1, 2003.