William Shatner knows firsthand how dangerous turkey fryers can be—so do the firefighters with the Illinois Fire Service Institute, who staged some of the common mistakes, with explosive results.

FIRE, METAL, OIL and TURKEY … and steam, too — a dangerous combination. $15 million in annual U.S. property damage is caused by deep fryer fires. According to the U.S. Consumer Products Safety Commission more than 141 serious fires and hot-oil burns have been reported from the use of turkey fryers over the last decade.

William Shatner loves deep-fried turkey, but over many Thanksgivings and Christmases he’s made mistakes, burned himself, and nearly burned down his house. In this dramatic retelling, Bill shows us how dangerous turkey fryers can be.

WRONG. Too much oil. Placement too close to the house, or inside a garage.

• Protect your eyes with goggles or glasses.

• Place the fryer in an open area away from all walls, fences or other structures.

• Never use fryer in, on, or under a garage, breezeway, carport, porch, deck or any other structure that can catch fire.

• Keep a fire extinguisher designated for oil fires nearby with someone on standby with familiarity on how to operate the extinguisher.

• Don’t over-fill — the volume of the turkey can displace oil, causing it to run over and ignite when oil contacts burner flame.

• Keep fryer in full view with constant monitoring while the burner is on.

• Keep children and pets away from the cooking area.

• Slowly raise and lower the turkey to reduce hot-oil splatter and to avoid burns.

• Immediately turn off the fryer if the oil begins to smoke. Smoke is a sign that the oil is about to ignite or reach its flash point.

• Make sure the turkey is completely thawed and be careful with marinades. Oil and water don’t mix and water can cause oil to spill over, creating a fire or even an explosion.

• Do not use a hose in an attempt to douse a turkey fryer fire.

• If you do burn yourself, or someone else is burned, seek immediate medical attention. 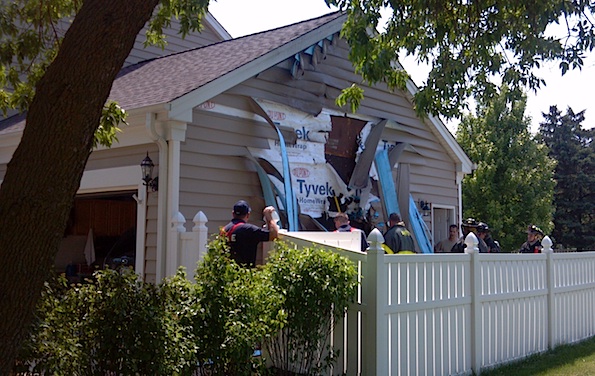 Arlington Heights police and firefighter/paramedics responded about 2:09 p.m. Sunday, May 27, 2012 to a report of a Turkey Fryer that ignited the side of a house in the 2200 block of North Walnut Avenue.

The homeowner was able to extinguish the fire with a fire extinguisher and water hose before firefighters arrived. Firefighters pulled siding down to check for extension of fire into the house.

Third Degree Burns at Old Orchard in Mount Prospect
Serafino Alfe, 86, tripped near a turkey fryer, causing about 30 quarts of hot oil to spill onto his leg. The accident caused third-degree burns that Alfe initially didn’t seem that serious. Paramedics recognized the seriousness of the burns and Alfe was transported to the Burn Center at Loyola University Hospital.

Turkey Fryer Death
In August 2007, Israel Hernandez, 5, was playing on his driveway at his home in the 500 block of East Merle Lane in Wheeling, Illinois on a Sunday afternoon. While his parents prepared food for his cousin’s surprise party inside the house, he somehow crashed the bike he was riding into a turkey fryer container that was cooking chili peppers in boiling cooking oil. He was seriously burned from the hot oil on his back and body from his shoulders down — about 60% of his body.

Israel’s parents immediately called 911, and suffered burn injuries to their hands while removing Israel’s hot clothing. Israel was conscious and protesting his trip to the hospital because he didn’t want to miss the party. Wheeling Fire Department paramedics requested a transfer by Loyola Lifestar helicopter immediately to the Loyola University Medical Center Burn Unit where Israel Hernandez arrived unconscious. After respiratory failure, Israel Hernandez died Wednesday, four days after his burn injury. The accident occurred at about 1:00 p.m. Sunday, August 26, 2007. Israel fought for his life until Wednesday at 11:17 p.m. when he was pronounced dead.