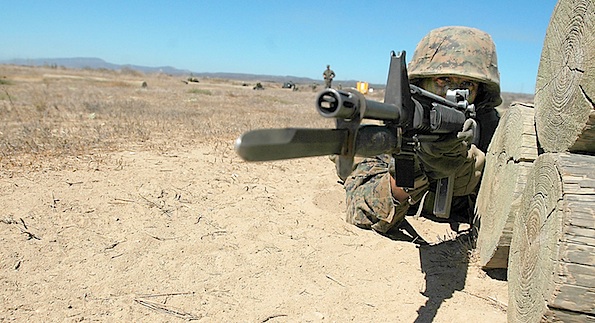 Ben Feller, AP White House Correspondent, points out that presidential candidate Mitt Romney played it safe. Obama supporters are claiming Romney wanted to switch the debate away from foreign policy to his comfort zone with the economy. While Romney supporters point out that it is a strong economy that backs up effective foreign policy.

You mentioned the Navy, for example, and that we have fewer ships than we had in 1916. Well Governor we also have fewer horses and bayonets.

The snarky comment is not at all accurate. While the bayonet might be a last resort for close combat, every U.S. Marine and every U.S. Army soldier is trained in the use of a bayonet fixed at the end of a rifle.

President Barack Obama. The U.S. Marines still use bayonets. Do you understand that? Yes sir! [Advanced to 2:26]

FACT CHECK:
Do we really have fewer bayonets?

Bayonets remain an important weapon in Army infantry training and deployment. The bayonet is a major factor in fighting during close combat for all soldiers.

MISSION
Defeat the enemy in hand-to-hand combat. Also used as a general field and utility knife.

MANUFACTURER
Multiple over the years

From 500 yards, every Marine is accurate with a rifle. Attach the OKC-3S Bayonet, and the weapon becomes just as effective in close combat situations. Also a Marine’s multi-purpose fighting knife, the OKC-3S is the weapon of choice when shots can’t be fired. Every Marine receives bayonet training in the Marine Corps Martial Arts Program (MCMAP) and on the Bayonet Assault Course in Recruit Training (from the official U.S. Marines website marines.com).

The American M16 rifle used the M7 bayonet which is based on earlier designs, including the M4, M5, & M6 bayonets. All these bayonets are direct descendants of the M3 Fighting Knife and have spear-point blade with a half-sharpened secondary edge. A newer M9 bayonet has a clip-point blade with saw-teeth along the spine, and can be used as a multi-purpose knife and wire-cutter when combined with its scabbard — the sheath that protects the blade. The U.S. Marine Corps uses the USMC OKC-3S bayonet, which is similar to the Marines’ iconic Ka-Bar fighting knife with serrations near the handle.

The bayonet is also used by military soldiers from Austria, Belgium, China, FranceGermany, Great Britain, and USSR (on the AK-47)