Ramon Echevarria, of Schaumburg, was identified as the driver that was killed at the scene of a crash into a building at 1801 Estes Avenue about 12:35 a.m. Thursday. The apparent street racing crash involved Echevarria’s 1998 black Corvette, which left the roadway while it was westbound on Estes Avenue. From Accident Investigation markings and tire impressions visible in the grass, Echevarria’s vehicle was traveling off the road for about 300 feet before it hit the commercial building at 1801 Estes Avenue. The whole travel distance from starting line to the crash was about 2000 feet.

Firefighter/paramedics left the scene about 2:26 a.m. except for one fire vehicle for lighting, with plans to return when requested by police at daylight.

Police were highly protective of the scene because of the fatality and because of the wide area encompassing the crime/investigation scene. Estes Avenue was blocked between Busse Road and Nicholas Boulevard.

A witness and night worker near the scene reported that a late model Chevrolet Corvette with no damage was also located at the scene. The vehicle had the vanity license plate “GONE.” The witness speculated that the subjects may have been at the scene already while racing on the street, but this has not been confirmed. The witness believed it would have been unusual for such a large group to have congregated around the crash that fast, at that hour of the morning. Police held at least 15 subjects for investigation and interviews between 12:30 a.m. and about 1:45 a.m. Thursday. Police notified the victim’s family immediately after crash.

In daylight, police were marking marks on the curb, and tracking tire marks in the grass. Police called for a tow truck at about 5:45 a.m. Thursday. Firefighters returned to the scene about 6:00 a.m. while Estes Avenue was still blocked — disrupting local area morning rush hour traffic.

Extrication of the victim resumed at about 6:28 a.m. Thursday. Extra fire rescue equipment was called to the scene about 6:50 a.m. for additional manpower. The victim was removed from the vehicle about 7:15 a.m. Cook County Sheriff’s deputies assisted Elk Grove Village police with management of the crash scene overnight.

The crash occurred about 4500 feet east of a reckless driving crash involving a 1967 Chevy Camaro on Sunday, July 15, 2012. The driver of the Camaro left the roadway, hit a boulder, flipped upside down and became trapped under a tree in the front lot of an industrial building. Estes Avenue is a wide open industrial roadway, sometimes with light traffic, that apparently attracts reckless driving. 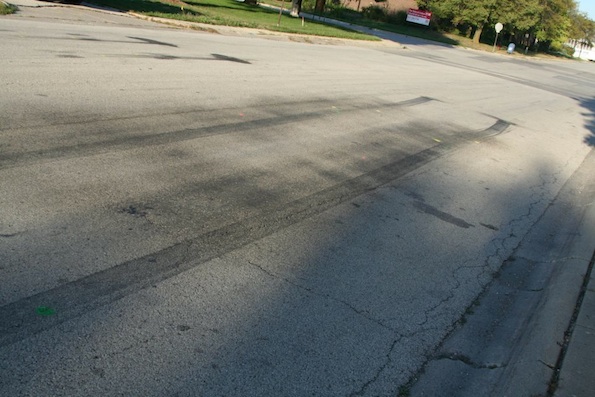 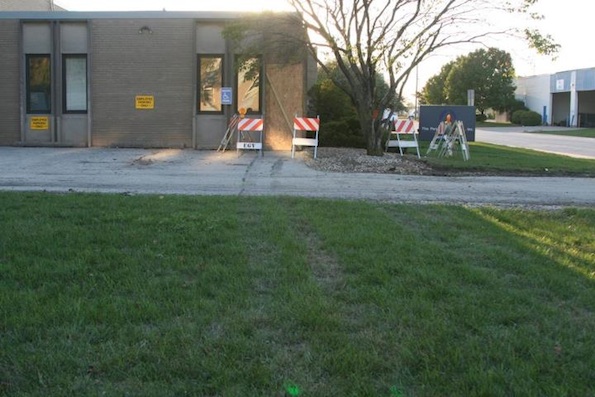