A reader wondered today where The Cardinal got information about a house fire on South Walnut Avenue Tuesday night. The reader, claiming to be Lee Anderson, writes that The Cardinal report Small Fire After Fireworks Or Pyrotechnical Material Set Off In House on South Walnut Ave, Arlington Heights was wrong. The Cardinal did not update information that the victim’s father transported the victim in his personal car because a decision was made to wait in case the police released a press statement about the investigation and circumstances involving the incident.

Police arrived on the scene and found one person down in the front yard. Apparently, while a police officer bravely went inside the house to check for more victims, the injured victim and his father took off to the hospital without waiting for firefighter/paramedics — whose sirens signaled their approach and immediate arrival. There’s no doubt that emergency care at the scene by paramedics is much preferred to rushing in a personal car without treatment and without pain relief for burns. Why did they suddenly leave with emergency personnel arriving on the scene? The 22-year-old victim’s flash burns on the upper legs and hands were serious enough to require transfer from Northwest Community Hospital to the Loyola University Medical Center Burn Center.

Lee Anderson chastised The Cardinal today with this message …

I don’t know where you got your information but “Arlington Heights police and firefighter/paramedics responded about 8:44 PM Tuesday to a report of a house fire in the 100 block of South Walnut Avenue. Police arrived first and reported that a male victim was lying in the front yard.” was wrong. I was there when it happened and the Daily Harold [sic] WAS CORRECT “The 22-year-old’s father took him to Northwest Community Hospital in Arlington Heights, but he was later transferred to Loyola University Medical Center’s burn unit.” Your website is constantly making mistakes and posting false information. Get new reporters ..

From the previous article … 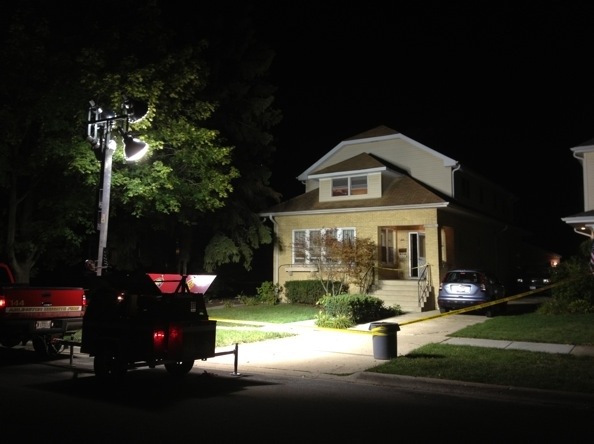 Arlington Heights police and firefighter/paramedics responded about 8:44 PM Tuesday to a report of a house fire in the 100 block of South Walnut Avenue. Police arrived first and reported that a male victim was lying in the front yard. Apparently a male resident of the house was working with some type of fireworks or pyrotechnical materials in the basement of the home, and was injured.

Light smoke came out of the house after firefighters ventilated the basement windows.

Several neighbors gathered near the scene and were concerned about the residents at the house, and were also concerned if there was still an explosion risk.

Although an explosion risk was not suspected, the Cook County Bomb Squad was called to the scene to check materials in the house just south of Sigwalt Street on the west side of Walnut Avenue.

Firefighter operations during arrival on the scene of a small basement fire, and investigation for hazard detection and the ruling out of criminal activity.