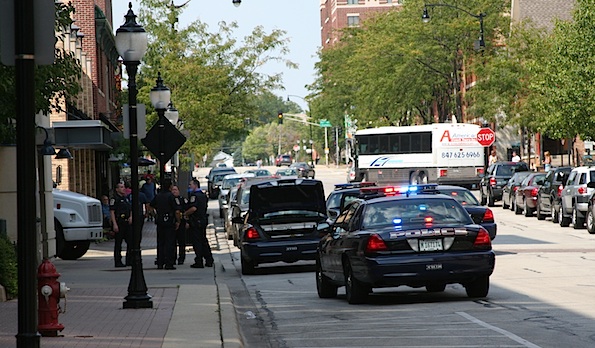 Arlington Heights police responded about 2:33 PM Saturday on Vail Avenue south of Campbell Street. Police received a report that three subjects were beating up a subject near a delivery truck in an alley. Police arrived within a minute and reported the incident was near the parking garage at 22 South Vail Avenue.

Firefighter/paramedics were called to the scene for a report of one person down. Apparently the person down, was the alleged offender in an assault with a beer bottle.

Three men reported they were delivering wedding tables, chairs and supplies on Vail Avenue when a man approached them and asked them for a cigarette. One of the men declined to give up a cigarette. The man, who a witness described as a local vagrant, became enraged and threw a Corona bottle at two of the men — breaking the passenger side window of the delivery truck and slightly injuring two of the men.

A third delivery man with a linebacker build defended his co-workers and laid the alleged offender out in the middle of Vail Avenue. The alleged offender suffered a laceration on his forehead according to witnesses. He was transported to Northwest Community Hospital by Arlington Heights firefighter/paramedics.

An Arlington Heights police evidence technician was on the scene taking photographs of the crime scene. No word on any arrest or charges. It did not appear that anyone left at the scene was taken into custody.