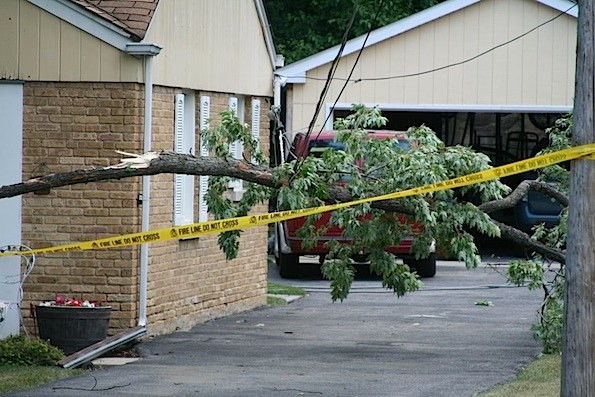 Storms moved through the Kendall County and Kane County about 11:30 a.m. Sunday, the west suburbs and southern parts of the northwest suburbs about 12:00 Sunday, and downtown Chicago about 1:00 p.m.

Winds of 80-90 mph hit the area, knocking down power lines and trees. Strong gusts even occurred north of Interstate 90 in Arlington Heights and Mount Prospect, where the radar did not indicate storms, but storm clouds were visible. A branch fell on a power line service drop in the 900 block of North Prospect Manor near Prospect High School threatening to start the house on fire. Mount Prospect firefighters stood by to wait for Com Ed to de-energize and repair the line while smoke rose from the roof of the house. No word on the extent of the damage inside the house was immediately available. Outside, the power line hung low over the driveway.

A path from Addison, Lombard, Wheaton, Glen Ellyn, Winfield toward Northlkake, Melrose Park and Stone Park was especially hard hit. Many tall pines were uprooted in Lombard and Addison. A roof was ripped off the Metro Industrial Tire and Supply building on the northwest corner of North Avenue and Swift Road.

One resident said he called 9-1-1 six times after the storm and got no answer. He wanted to report that an 80-foot pine tree topple over railroad tracks just northeast of Swift Road and Fullerton Avenue. He and another man ended up cutting of the top of the pine tree, and dragging it off the tracks himself.

A MABAS Division 20 3rd Alarm life safety box was called for firefighters to evacuate Concord Place Retirement & Assisted Living Community because backup generators did not work. Senior residents were transported in air conditioned buses to area hotels — some as far as Palatine. Large areas along Lake Street, North Avenue, York Road, Mannheim Road and more were dark overnight. The 20-story Concord Place building lit up eerily in the dark — lit by firefighter spotlights. MABAS Division 3 set up an interdivisional Task Force to assist Division 3 firefighters during the evacuation. Firefighters responded for manpower and to coordinate the safe evacuation of the residents from the building. Ambulances, fire engines and cooling buses filled the parking lot and driveways of the retirement and assisted living community. 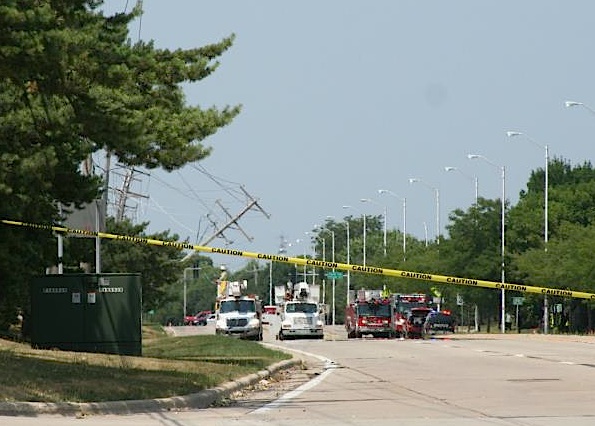 Utility pole leans at a 45-degree angle over the southbound lanes of Plum Grove Road in Schaumburg.

In Schaumburg along the west side of Plum Grove Road, high winds bent a power utility pole about 45 degrees, which caused other poles to lean. Com Ed immediately de-energized the lines, uprighted the pole, and worked to restore power.

Com Ed has reported that it may take several days to restore all power to the city and the suburbs.