Intense Gladiator Fire visible from North Phoenix — smoke is thick and dark, which is not a good sign.

A wildfire known as The Gladiator Fire is still burning out of control in the Bradshaw Mountains north of Phoenix. Fire officials told evacuees of Crown King Tuesday night that their homes are still in jeopardy. The fire started as a house fire on private property on Sunday May 13, 2012 at about 11:00 a.m.

Crown King is an unincorporated community in Yavapai County, Arizona, United States, located at an elevation of 5,771 feet with a population of a about 133 people. The town is a historic gold mining town that goes back to 1875 where eventually an estimated $2 million of gold was mined. The mines have been closed since the 1950’s with tourism now the main economy of the town. Some explosives, which were used for mining, remain in the town and pose a risk for firefighters. 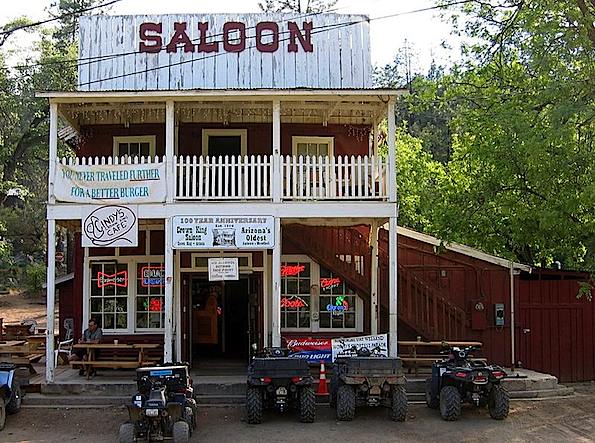 Crown King Saloon was once moved in pieces from another town.

Firefighters are trying to prevent a wildfire near Crown King, Arizona from passing a fire line that’s about a mile west of the historic mining town. If that happens, the blaze could move south and threaten homes and businesses. (May 16)