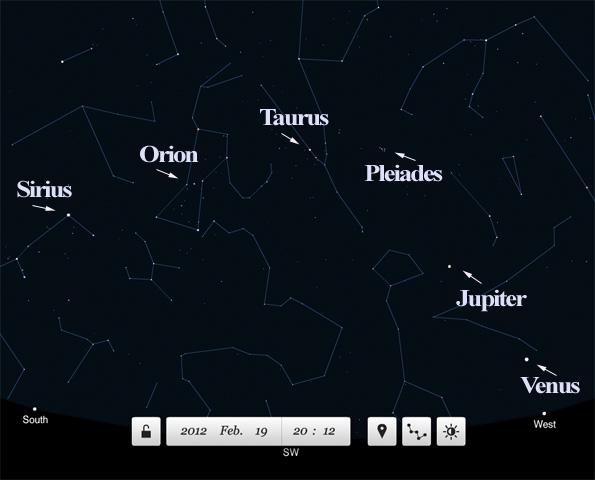 A clear sky with visibility greater than 10 miles, and without the light of the Moon, created ideal conditions for seeing stars and planets Sunday night. Between 7:00 p.m. and 8:30 p.m. the ideal conditions were enhanced because of the heavenly bodies that were showing in the western sky.

Starting from the south (left) was Sirius, which is the brightest star of all stars in the night sky. The sun is brightest during daylight.

To the right of Sirius was Orion and the three-star Orion’s belt consisting of the stars Alnitak, Alnilam, and Mintaka. Betelgeuse and Rigel are also bright stars in Orion.

To the right of Orion was Taurus with the impressive red eye of “The Bull” known as the star of Aldebaran.

To the right of Taurus was Pleiades — a cluster of stars that twinkles like jewels in the night sky.

To the lower right of Pleiades was Jupiter — a planet about the same magnitude in brightness as Sirius.

To the lower right of Jupiter was Venus — the brightest planet in the sky.

You can check the night sky anytime by visiting the following planetarium link on The Cardinal — Arlingtoncardinal.com