The Aurora Borealis, known as the Northern Lights, have been visible over Scotland and large parts of northern England. Report by Sophie Foster. facebook.com/itn

The largest solar storm in seven years is expected to send solar wind and a shower of radioactive solar particles at the Earth at almost 1,400 miles — possibly peaking tonight and early tomorrow.

Solar flares release up to a billion tons of matter and may cause unusually large display of auroras, which may be visible at lower latitudes than normal. The aurora displays in England and Scottland were seen at about 50° to 53° latitude. Chicagoland is at a lower latitude of about 41°.

Unfortunately, the local weather forecast has changed to mostly cloudy for Chicagoland overnight, so the Aurora are not likely to be seen. Unless it lights up some clouds. 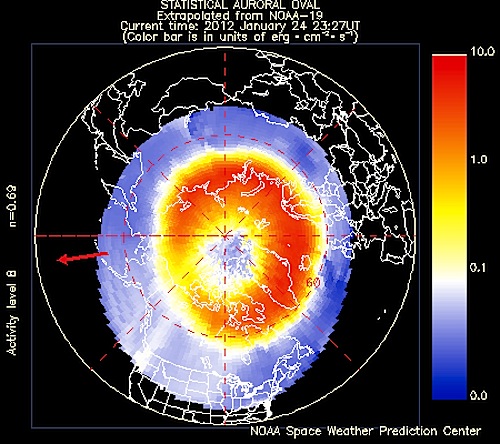 The Statistical Auroral Oval gives an idea where the strongest aurora display may be. The red arrow displays high noon on earth. Click the image for the current activity.