A helicopter with 5 people aboard crashed into the East River after taking off, killing 1 passenger and injuring 3 others. NYC mayor Michael Bloomberg says the pilot apparently reported problems in the chopper and said he was turning around. 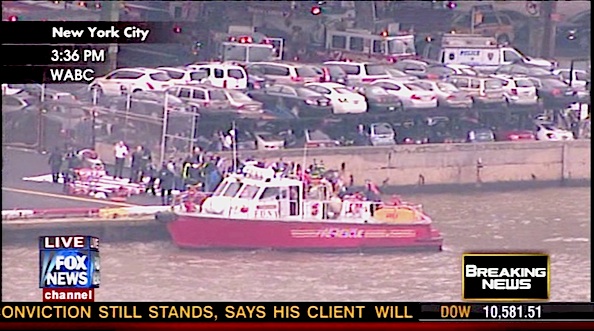 Helicopter crash in New York City at 34th Street and East River
water temperature is about 68°F. the helicopter had four or five people on board. Fire department divers were reported to be possibly searching for a fifth victim.

Fire-Rescue personnel were in the water immediately. The helicopter was submerged within seconds after hitting the water. 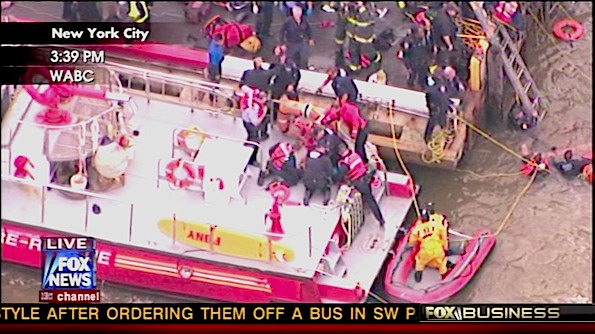 Fourth victim just transferred to a rescue gurney on a backboard from the water of the choppy East River (See video on FOXNEWS.COM).

Two people are reported seriously injured. At least one victim rescued — possibly the fourth person that was rescued from the water — was being given CPR at about 3:41 ET Tuesday. One female is reported to be killed at the scene.

A report from witness is that the helicopter was seen upside-down before it submerged completely underwater. Another witness said it appeared the helicopter appeared to be making a landing at the East 34th Street Heliport before it hit the water.

Stay informed with news while you’re on Facebook from The Cardinal’s Emergencies Behind the Scenes Facebook page — Facebook.com/CardinalEmergencies. Includes links to favorite public safety and emergency rescuers and product manufacturers and safety companies that have facebook pages. Submit your pictures or just stay up-to-date on with fire, rescue, EMS and police photo galleries. Please add your public safety photo to the wall album — go direct to the Arlington Cardinal Emergencies Behind the Scenes photos. For a list of all of The Cardinal Facebook fan pages, go to Arlingtoncardinal.com/about/facebook …