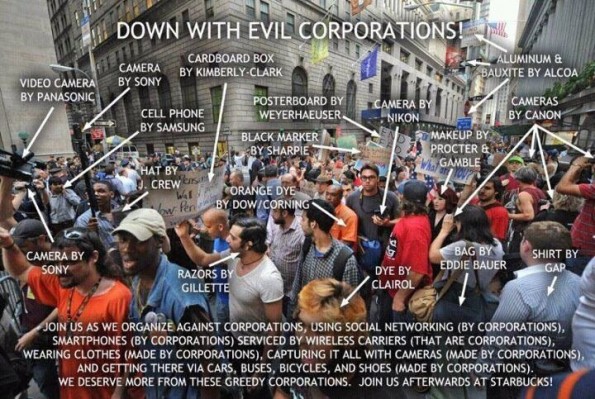 Graphic circulating on Facebook that depicts demonstrators with corporate gear.

Some might call ‘Occupy Wall Street’ demonstrators clever by using the corporations’ products against the corporations, but some call the use of cameras, nice clothes, cardboard poster, markers, and makeup an example of irony or hypocrisy.

Some quotes about the “We Are the 99%” demonstrators …

“To protest Wall Street and the bankers is basically saying you’re anti-capitalism … “jealous” Americans who “play the victim card” and want to “take somebody else’s” Cadillac … “Why don’t you move the demonstrations to the White House?”

“I support the message to the establishment — whether it’s Wall Street or the political establishment and the rest — that change has to happen. We cannot continue in a way that is not relevant to their lives.”

“The core is the American people do not think the system is fair or on the level. That is the core of what you’re seeing on Wall Street,” he said. “There’s a lot in common with the Tea Party. The Tea Party started why? TARP. They thought it was unfair, we’re bailing out the big guys. What are the people up on the other side of the spectrum saying? The same thing.”

“This administration’s failed policies have resulted in an assault on many of our nation’s bedrock principles,” he said. “If you read the newspapers today, I, for one, am increasingly concerned about the growing mobs occupying Wall Street and the other cities across the country. And believe it or not, some in this town, have actually condoned the pitting of Americans against Americans. But you sent us here to fight for you and all Americans.”

“I am so impressed by what I’m seeing here. You have done something very important and very historic. it had to happen somewhere, it might as well been here.”

People are “rightfully upset about the inequality.”